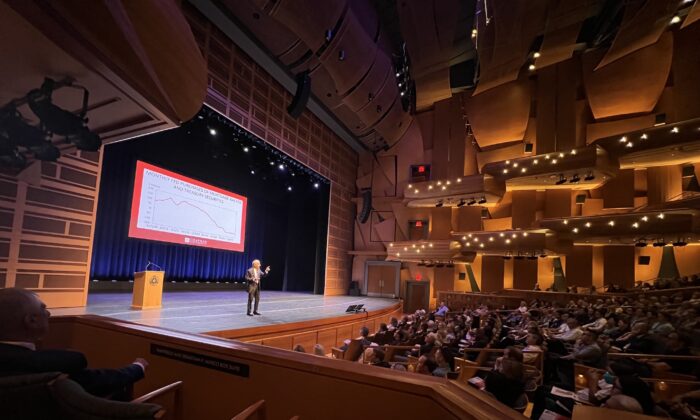 ORANGE, Calif.—Economists at Chapman University are predicting Republicans will see a midterm gain of 53 seats in the House of Representatives and high gas prices may be the reason.

“There is a relationship between the price of gas and election results,” Chapman University President Emeritus Jim Doti said June 23 at the school’s Economic Forecast Update in Orange, California.

A president’s political party typically loses seats in the House during the midterm elections, Doti said. The only exceptions since 1946 were with former presidents Bill Clinton and George W. Bush. Gas prices were low during both events, he said.

“When you had lower gas prices, those were the two elections where the president’s party actually gained seats,” Doti said.

Gas prices remain at record highs, hitting an average of $6.59 in California this week.

The team looked at the relationships with general inflation, which had no bearing on lost seats, and national economic growth, which had a small influence, he said.

No question, Republicans will have a strong majority in the House next year and possibly retake the Senate, Doti said. This might complicate the looming recession that Doti predicts will hit later this year or by mid-2023.

“When the recession hits, the president will have more difficulty in enacting fiscal legislation to get us out of it,” Doti said.

The country will also face a recession possibly as early as the end of the year, according to the university’s semiannual economic outlook report.

“I think most likely the recession will hit early to mid-year next year,” Doti said. “There’s even an outside chance that it could hit later this year.”

The looming recession is being fueled by the federal government’s attempt to tame rising prices, according to the report.

The Federal Reserve Board’s interest rate increases and a drastic decline in government spending will combine to spark a recession, according to Doti.

Typically, the onset of a recession occurs about two-and-a-half years after interest rate increases.

Officials expect more rate increases through this year, ending with a federal funds rate of 3.4 percent—the highest level since January 2008.

“The magnitude of these decreases in the deficit are unprecedented and will surely magnify the downward pressure on spending and thereby increase the likelihood of a recession as early as mid-2023,” according to the report.

Inflation is expected to recede slightly from the 8.6 percent it reached in May. Economists predict rates to fall above 6 percent through the end of the year. The decline in growth will continue at least through 2023 as the Fed continues to offload its holdings of government bonds and mortgage-backed securities, according to the report.

The average drop in the stock market during a recession is 33 percent. The market is down 21 percent now, which means the market could still drop another 16 percent before it recovers to a bull market, Doti said.

California has not fully recovered from the COVID-19 recession, Doti said. After a peak of 17.7 million jobs in 2019, total jobs in the state have only reached 17.2 million this year—a half-million shy of the pre-pandemic high and 0.8 percent lower.

The difference is likely caused by more stringent COVID-19 policies in California compared to Florida, Doti said in the report.

California’s job growth is expected to increase at a faster rate this year as more unemployed workers return to the labor force, but that may be short-lived.

The state lost about half a percentage of the population—or about 200,000 people—last year, which more than offset the growth from births and immigration.

Most Californians who left the state were seeking states with lower taxes, Doti said. But they might be leaving to follow their jobs.

“Fifty-six percent of the loss of people are heading towards states with no state income tax,” Doti said.

This may be the result of businesses moving out of the state, he said.

In a survey, two-thirds of CEOs ranked California as unfavorable or most unfavorable because of unaffordable housing, state taxes, and labor relations.

Forty percent of CEOs surveyed said they’re planning to move out of California, he said.

Orange County may lag slightly behind the state in job growth this year. Economists forecast the county’s growth to reach 5.1 percent compared to the state’s 5.5 percent growth. Most of the growth is fueled by post-COVID recovery of jobs in the leisure and hospitality industry.

Between 2015 and 2022, Orange County reached 7.2 percent in job growth, which surpassed the 5.5 percent in Los Angeles, but fell behind most other California cities.

In 2022, median family income in Orange County dropped to 15 percent below what it takes to qualify to buy a house in the county, Doti said.

The county’s sizzling housing market is expected to slow down as the county sees fewer homes on the market and nearly 1,000 fewer new homes being built. Higher mortgage rates will also lower home prices.

Housing prices are expected to depreciate by 12 percent in the middle of 2023, according to the report. But that might not make housing costs more affordable because mortgage rates will increase with the rising interest rates.