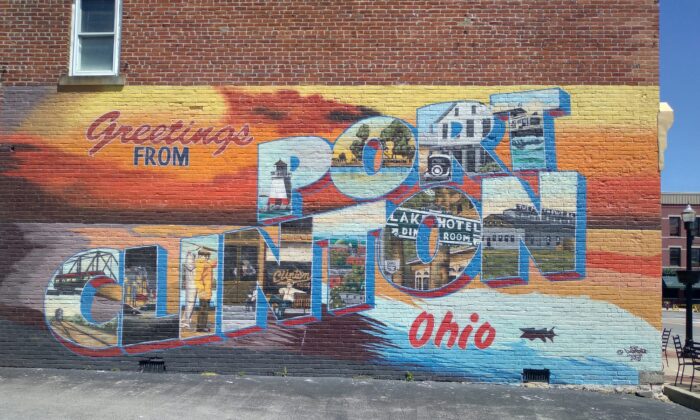 A mural on the side of a building in Port Clinton, Ohio, shows some of the attractions available for tourists. (Michael Sakal/The Epoch Times)
Economy

As gas and fuel prices continue to rise, Ohio’s lakefront town of Port Clinton is pushing back to prepare for its busiest tourist season and stay afloat during challenging times.

Spring has sprung in the Heartland and tourists are returning to the region known as Lake Erie’s Coastal Ohio Trail. A resort for relaxation it is nestled between Cleveland and Toledo and is a fisherman’s bastion.

As the diesel engines of ferry vessels and charter fishing boats rev up in the city known as the Walleye Capital of the World, the chamber of commerce and workers in the tourist industry are preparing to have their first full and robust season following the pandemic began in 2020.

Since last year, the price of gas and diesel fuel has nearly doubled, supplies for restaurants—such as plastic cups—now are hard to come by, and grocery shoppers are grouchier coming out of the store than they were going in as ground beef hovers around $4 a pound.

The week of May 9, a gallon of regular unleaded gas ranged from $4.25 to $4.29. As of May 17, it was $4.50 a gallon. Diesel fuel costs considerably more, but with ferry services and most charters buying it in bulk, it helps keep their price down.

To help cover the cost of transporting people across the lake to the destination spots of Put-in-Bay and Kelleys Island, ferry services have implemented surcharges ranging from 5 to 8 percent solely to offset fuel costs.

The surcharges will be in place until fuel prices settle down, Jet Express general manager Kelly Freimark told The Epoch Times.

Freimark is also the chairman of the Port Clinton Area Chamber of Commerce’s board of directors.

From Memorial Day to Labor Day, the population of Port Clinton goes up from 6,000 to 120,000 through the week, and 250,000 on weekends, the chamber’s president Nicole Kochensparger told The Epoch Times.

The city is also preparing for its 41st Walleye Festival from May 26 to May 30 over Memorial Day Weekend when 24,000 to 26,000 people are expected to pass through by car or boat for the food, live music, and rides for the kids.

“When I started sending out reminders of the Walleye Festival to the vendors, the first call I received was from our ride company (Durant Amusements in southwest Ohio),” Kochensparger said.

“The generators for the rides run off diesel fuel and they told me that because of the increased price of fuel, they were going to have to raise the price of tickets for the rides.”

Durant Amusements uses about 20 diesel generators for its rides, and to offset the fuel increase, daily ride tickets increased by $2 from a year ago. An all-weekend pass for unlimited rides went up to $10 from last year, or from $40 to $50, Kochensparger said.

Port Clinton’s push to hold the line parallels the May 18 announcement of President Joe Biden’s administration canceling another oil and gas lease opportunity that was pending before the U.S. Department of the Interior.

The decision, which halts the potential to drill for oil in over 1 million acres in the Cook Inlet in Alaska, comes at a time when consumers and gas station managers believe the cost of gas in Ohio could reach $5 a gallon by the 4th of July, and be much higher in other states.

In a statement, the Department of the Interior cited a “lack of industry interest in leasing in the area” for the decision to “not move forward” with the Cook Inlet lease sale.

The department also halted two leases under consideration for the Gulf of Mexico because of “conflicting court rulings that impacted work on these proposed lease sales.”

Under then-president Barack Obama, the Bureau of Ocean Energy Management canceled lease sales in Cook Inlet three times—in 2007, 2008, and 2011—also citing “lack of industry interest” at the time as the reason for scrapping the sales.

Kochensparger said that residents and businesses in Port Clinton have been affected in many ways.

“The high cost of fuel, inflation, and supply chain issues still happening, are affecting everything in this town,” Kochensparger added.

“At first, you just don’t realize the effect will have. It has had a domino effect. The things we’re experiencing are still Covid-related.

“The year 2020 was a disaster for everybody, and 2021 was a mixed bag because of the restrictions due to mask mandates and social distancing. Now, everyone wants to get out and do things. We’re anticipating a busy year.”

Just at the chamber office alone, its annual liquor liability insurance has doubled from $800 last year to $1,600 this year, and a case of copy paper has more than doubled—up from $35 last year to $74 now, Kochensparger said.

“You have trouble getting things you just don’t think about,” Kochensparger added.

“The T-shirt suppliers are limited on the colors they can get. The plastic cups we provide for the outside drinking areas for the restaurants are hard to get.

In 2020, the ferry vessels from the Jet Express or Miller Ferry were shut down for tourist traffic. In 2021, they limited the number of passengers on the vessels and their schedules.

The company’s operating insurance also has increased by 60 percent from a year ago, Freimark said.

Jet Express has four ferries, two that can carry up to 375 people and two with a 149-person limit. It ferries an estimated 300,000 people from Port Clinton to the islands during the tourist season, Freimark said.

“We burn about 8,000 to 10,000 gallons of fuel on a busy weekend,” Freimark said. “We’re looking at paying $4.50 or more a gallon, so we have surcharges in place dedicated 100 percent to offsetting our fuel costs. We have had to up our prices accordingly.

“Looking at the cost of labor and doing business, it’s really a pretty modest increase so we can stay above water and keep moving forward.”

“Unfortunately, there comes a point where part of the higher costs gets passed down to the consumer,” Freimark added.

However, one of the vessels is in need of repair and is awaiting for Caterpillar to deliver cylinders and pistons from Brazil, where the parts are made, Freimark said.

There are Caterpillar facilities in Ohio, but they do not make the parts needed for the ferry vessels, Freimark said.

Beginning May 23, Jet Express will run every 45 minutes seven days a week.

“Not being able to get those engine parts from Caterpillar is going to put me in my grave,” Freimark said. “The parts are coming from Brazil, and Caterpillar said they won’t be able to deliver them until the end of June—and that’s on an emergency basis.

“The first two weekends of May, we were pretty busy,” Freimark said. “We’re looking at having a more normal year.”

Miller Ferries, the other major ferry in Port Clinton, did not respond to phone calls seeking comment, but one of the company’s brochures said a round trip ticket to the Put-in-Bay costs $16 for adults (12 and older), $3 for children (six to 11 years old), and $40 to transport a car round trip. The cost to transport a motorcycle round trip was listed as $32.

About a block away at Fisherman’s Wharf, its general manager Mark Wolf told The Epoch Times that the high cost of fuel has caused the 62-year-old family business owned by Tim McCann to raise its prices.

Fisherman’s Wharf runs three boats each with a 20-person limit.

The business didn’t raise any prices in the past two years because of the pandemic, but Wolf said they raised the price up from $50 a person last year to $70 a person this year.

“Why does it go up 50 cents in a month?” Wolf said. “I don’t know. Maybe Russia’s war in Ukraine? There are a million excuses Washington [D.C.] uses, but who knows what the real answer is.

“These high fuel costs are hurting everybody,” he added. “It costs more for people to get here, and people sometimes don’t go as far on vacation when they’re paying more for fuel and other things.”

A key ingredient to having a successful season simply is the weather, Wolf said.

“When we have the good weather, we get the customers. We just hope the weather cooperates.”

Although Wolf said he didn’t know what the answer was in controlling the fuel prices, a little further inland Roman and Deb Shepherd, a retired couple coming out of the Kroger grocery store, were more than disgruntled and unloaded a full-blown answer.

“We have to watch every dime we spend,” Roman Shepherd of Bryan, Ohio, said. “I refuse to give money away because someone is in the White House who doesn’t know what he’s doing, or where he’s at sometimes.”

Shepherd, who is a retired millwright from Tomco Plastics in Bryan, said he and his wife spend time at their cottage in Port Clinton, and it costs $38 to fill half of the gas tank in their new Kia Sportage that gets 34 miles per gallon.

“I have a problem with this president’s war against fossil fuels,” Roman Shepherd said. “It doesn’t make sense that he shuts down another pipeline.

“The best thing to do is when election time rolls around, is to vote them out of office. I just don’t know or understand this country anymore.

“We’re both OK money-wise, but if it gets any worse, we’re going to have to make some cuts,” Shepherd added. “We just watch ourselves with everything we do. When we’re at home and leave a room to go into another, we make sure we turn the light out … so we’re not wasting any money.”

Back on the lakefront, a longtime boat charter service also has been able to hold the line.

At Tibbels Marina and Charter Service in neighboring Marblehead, a 100-year-old operation in its fifth generation as family-owned business, the cost of a seven-hour charter is up $50 from a year ago, but no surcharges have been implemented there, yet.

Tibbels has four 40-foot party boats that accommodate up to 15 people and two 30-foot boats that handle six people, Tibbels co-owner Jackie Grosswiler told The Epoch Times. She owns the business with her brother, John Tibbels.

Regular gas currently is $5.09 a gallon and diesel fuel is $5.19 at its marina, about a $2 per gallon increase from last year Grosswiler said.

“We haven’t discussed a surcharge to offset our fuel costs, so far,” but if things keep going up, we’ll have to,” Grosswiler said.

“From what we’ve seen so far this year, we’re going to have a pretty good year,” Grosswiler said.