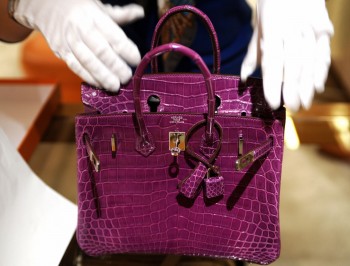 The 174 year-old French luxury label has reported an increase of 50 percent in its first half profits, to $420 million, due to increased demand for Birkin and Kelly handbags in the United States and Japan, despite ongoing economic woes.

Moreover, Hermes sales in the first half of 2011 grew 22 percent to $1.90 billion, compared to the same period last year. This is following a similar trend to other competitors in the luxury fashion industry such as LVMH Moet Hennessy Louis Vuitton SA and Burberry.

The key challenge for the company has been a matter of supply to keep up with demand. The company hired 400 staff.

Patrick Thomas, the French brand’s chief executive officer, said: "we haven't yet seen a reduction in the number of people coming into our shops, not even in Japan [following the earthquake and tsunami disaster. The trend is still very good, but is lower than that of the first half. This is not at all due to a drop in the number of people in our stores. There are stores where we are a little tight on stocks. This isn't an alert. It's not serious. We are selling at the rate we are producing."

Shares of Hermes have gained 69 percent in 2011, since LVMH bought a 21 percent stake in the company. Hermes is an SCA, or Societe en Commandite par Actions, a French corporate operation, which enables members of a family who technically own a business to maintain control of decision-making despite being minority shareholders.

The Hermes family still controls around 62 percent of the company shares and has made great attempts to protect its ownership.