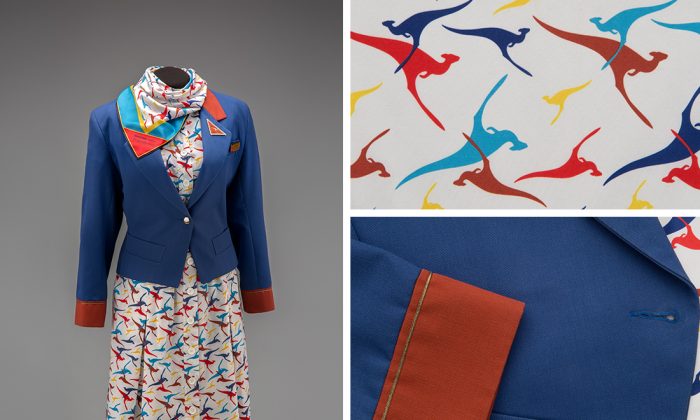 There is more to the San Francisco International Airport than just showing your tickets and your passport, going through the security checkpoints, schlepping your oversized carry-on luggage, and trying to figure out what to do with the mandatory pre-departure three hours.

Eureka! The San Francisco International Terminal’s SFO Museum has solved this problem by presenting a fabulous historic exhibit titled Fashion In Flight: A History of Airline Uniform Design for you to view, enjoy, and learn about the famous fashion designers who were commissioned by various airlines to add their touch of glamour, elegance, sophistication, and pizazz in outfitting the crews.

This fascinating exhibit features 70 female airline uniform ensembles and additional accessories that date from 1930 to the present time.

It chronicles the evolution of the uniform design from the in-house origins of the pre-war era to the renowned couturiers and their fashion ateliers that created and produced extraordinary collections for airlines during the 1950s to the contemporary styles of today.


According to the museum’s press release: “Airline uniform occupies a unique place in the history of women’s wear. For more than eighty-five years, the airlines’ passenger-service and safety professionals—variably called stewardess, hostess, and flight attendant—have been dressed in outfits designed to signify a distinct role in the workplace, project the identity of their employer, and reflect prevailing fashions of the times.”

“These often conflicting demands of singularity, diversity, and conformity have created a distinct garment type, one that has penetrated deeply into the social conscience of popular culture while providing fashion designers with remarkable challenges and creative opportunities,” it states.

The majority of the uniforms in the exhibition were selected from the permanent collection at the SFO Museum. Additional uniforms, accessories, and images have generously been made available by lenders including Aeroméxico, Air France, American Airlines C.R. Smith Museum, Delta Flight Museum, Flight Path Learning Center & Museum, Frontiers of Flight Museum LAX, The Museum of Flight, NWA History Centre, Qantas Heritage Collection, The University of Texas at Dallas, United Airlines Archive, Virgin Atlantic Airways, and other private sources.

Next time you fly out of the San Francisco International Terminal, spend some quality and enriching time viewing the SFO Museum’s historic exhibit Fashion In Flight: A History of Airline Uniform Design (on view from June 16, 2016, to Jan. 8, 2017) and many other impressive and interesting exhibits the SFO Museum curates on a regular basis.