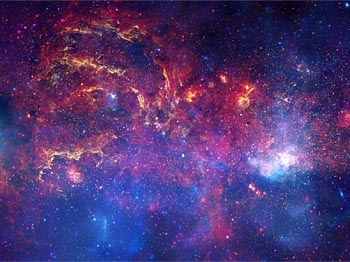 By Mo Xinhai
Print
A high-density galaxy 11 billion light-years away that has been recently discovered is found to reflect the state of galaxies in the early stage of the universe.

In August this year, for the first time in history, astronomers were able to measure the travel speed of stars in the galaxy identified as 1255-0, based on data sent from the Hubble Space Telescope and the Gemini South telescope in Chile. These hyperactive stars move through the galaxy at about twice the speed of our sun through the Milky Way.

Generally, astronomers believe that the bigger the mass of a galaxy is or the closer the stars are to the center of the galaxy, the faster the stars move. Given the small size and large mass of the 1255-0 galaxy, it was suggested that the stars within it would move at a high speed. According to theories of modern astronomy, since galaxy 1255-0 is as far as 11 billion light-years away, it is seen as it existed 11 billion years ago, less than 3 billion years after it was born in the theoretical Big Bang.

Astronomers think these galaxies will eventually become the less compact galaxies we are familiar with, but how high-mass galaxies grow in size but not in mass will be a long-time mystery. Currently, it is thought that massive galaxies are formed by collisions of small galaxies, which result in the galaxies’ mass increasing with the size.

The confusion is perhaps caused by two hypotheses that cannot be proved. One is that remote galaxies follow a law of motion similar to the solar system, and the other is that our nearby galaxies evolve from those remote galaxies.

Indeed, in the past, astronomers discovered that stars beyond the solar system very likely followed a different law of motion, and had to introduce a new concept called dark matter to fill the gap.