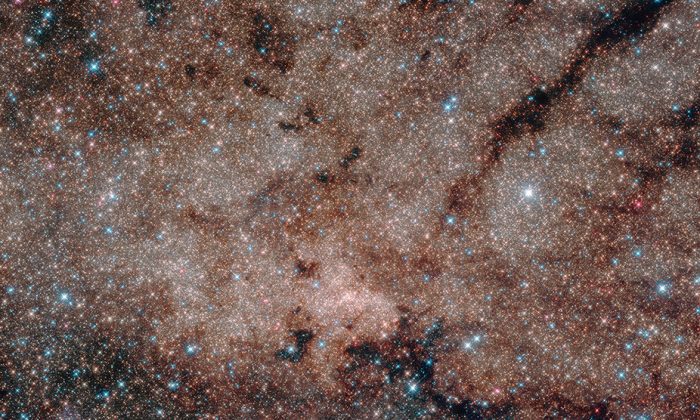 Except for a few blue foreground stars, the stars are part of the Milky Way’s nuclear star cluster, the most massive and densest star cluster in our galaxy. (NASA, ESA, and Hubble Heritage Team) (STScI/AURA, Acknowledgment: T. Do, A.Ghez (UCLA), V. Bajaj (STScI)
Science

Each fortnight I get the amazing opportunity to speak about my top stories in space on ABC Breakfast News TV but for those of you who hate early mornings I wanted to make sure you got to hear of these awesome events too.

Peering Into the Heart of Our Galaxy

The ageing and yet still awesome NASA Hubble Space Telescope has peered into the center of our Milky Way galaxy and revealed half a million never before seen stars.

In this NASA video we peer into the heart of our galaxy, revealing half a million never before seen stars (in a reddish color) visible to the Hubble Space Telescope’s infrared camera.

How did we miss this many stars in our own backyard?

Well for starters, the center of our galaxy is a busy place, with a million stars crowded into the region between our Sun and our nearest neighbor Alpha Centauri. It’s hard to conceive of just how bright the “night sky” would be for any aliens in the galactic core.

To make things even more confusing there exists a supermassive Black Hole that can blind telescopes, although this is currently dormant it may yet fire into life by accreting nearby gas and stars.

Something New Under a (Dead) Sun

The main reason is that there are giant clouds of gas and dust around the stars that can block their light. It’s similar to how your visibility decreases when driving a car in fog. Yet in that same car you can still listen to the radio, which is a different wavelength of light and able to easily pass through the fog. Rather than using optical wavelength the Hubble Space Telescope used another type of light with its infrared camera to peer through this gas and dust and see the hidden stars behind.

Even Hubble has limits though and there are likely another 10 million stars yet to be discovered.

Telltale rings in a disc of gas and dust discovered by the ALMA telescope indicate a growing family of young worlds.

The gaps in this disc around a young star just 10 million years old are caused by planets growing through gravitationally “hoovering up” the material along their orbit then shepherding the edges clean.

Even at a distance of 175 light-years the incredible resolution of ALMA means we can actually see a gap around the star TW Hydrae at a similar distance that Earth is from our Sun. This makes for the exciting possibility that this baby planet will one day grow into an Earth (or perhaps continue to increase in size to a super-Earth).

This is like being shown an ultra-sound of our own Solar System’s earliest days and will likely be the best resolved image we have for years to come.

Forget the Beach-House, Get a Blow Up Space Habitat

This is an inflatable habitat that will be connected to the space station and then carefully expanded, increasing in volume from 3 to 16 cubic meters. This will be the first inflatable structure ever tested on the ISS and will be a carefully managed experiment.

Only when all safety checks are completed will astronauts from the station travel into the BEAM to install sensors before resealing it. After that, all this extra room on a craft where space is a prized asset, will be left unused except for periodic checks over the next two years.

Discovering the Bath Scum on Titan

Big challenges are ahead though as it has to survive getting punctures from fast moving space debris as well as showing it can provide protection from the dangerous radiation of space too. As Bigelow is a private company and created BEAM with proprietary materials we don’t know exactly how it will hold up. However, it appears to be built with a material similar to the Vectran used in astronaut’s spacesuits so there’s no reason to think it won’t last.

If all goes well with BEAM, then the future is truly incredible. Everything from using inflatable spacecraft to reach Mars to “space hotels” or commercial space stations.

This is a huge week in space and well worth an early Monday morning start.

Alan Duffy is a research fellow at the Swinburne University of Technology in Australia. This article was originally published on The Conversation.