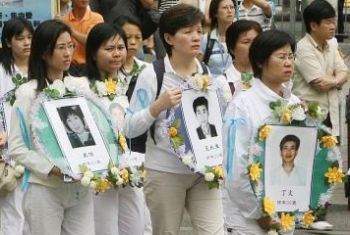 Women hold photos of Falun Gong practitioners who have died in Chinese prisons during a ten year persecution by the Chinese regime. (Mike Clarke/AFP/Getty Images)
International

Don Robertson
View profile
Follow
biggersmaller
Print
Falun Gong practitioners and supporters are commemorating the ten-year anniversary of the Chinese regime’s persecution of the practice, a campaign that has been dubbed a “hidden holocaust.”

That theme was elaborated upon by Falun Gong spokesperson John Deller at a Wednesday July 15 forum at NSW State Parliament in Sydney, Australia.

“A holocaust is described as any mass slaughter or reckless destruction of life, and I’m sure you would agree that’s what has been happening,” Mr Deller said.

First to speak was NSW Legislative Council member Rev Hon Dr Gordon Moyes. He told of being caught smuggling bibles into China and his advocacy efforts for Chinese students in Australia to be given permanent residency after the 1989 Tiananmen Square massacre.

Dr Moyes said that when the first Falun Gong forum in State Parliament was to be held several years ago, the Chinese Embassy called, pressuring them to cancel it. Dr Moyes made sure that didn’t happen.

“We told the Embassy to shoot off. I have never subsequently been invited to China.”

He said he had met Chinese missionaries with scars and tales of torture and beatings, similar to how Falun Gong practitioners are treated today.

“In an earlier day it was Christians that went through that,” Mr Moyes said. “My concern is for human rights, whether it’s for Christians or Falun Gong people.

“China could be the greatest country in the world, but they need to understand that the rights of every single person are inalienable.”

Mr Deller spoke of Falun Gong’s development and subsequent persecution in China. He reminded the audience that in 1995 when the practice was spread overseas, Falun Gong founder Li Hongzhi’s first talk was held in the Chinese Embassy in France, after an invitation from the Chinese Ambassador.

He said contrary to some belief, Falun Gong (also known as Faun Dafa) thrives in China, particularly by using the Minghui.com website which was created and maintained by Falun Gong practitioners, to exchange information and to expose the CCP atrocities, .

“It’s through access to that website that Falun Dafa practitioners inside China have been able to communicate with the outside world,” Mr Deller said.

He said 254,000 cases of persecution have been logged on Minghui since the persecution began in July 1999, and the site has received over 406,000 solemn declarations from Falun Gong practitioners declaring that statements they made against Falun Gong while under pressure from authorities are null and void.

“That gives us an idea of the scale of the persecution,” Mr Deller said.

“The Communist Party is trying to coopt people in the West down the same path,” Mr Deller said. “It’s basically an attack on human morality.”

“Our thoughts will either help to disintegrate the Communist Party or help to sustain it.”

“Sadly Australia is no exception,” Mr Deller said, describing a certificate issued by Foreign Minister Stephen Smith under s40 of the Foreign States Immunity Act which allows the Minister to confer immunity on a foreign state official that the court has to accept.
“That certificate is in effect a directive to the court which is disturbingly similar to the directive given to the courts in China,” Mr Deller said.

She was tortured to make her give up her belief in Falun Gong.

“When people ask me what life was like in the camp, I can only say it was a living hell,” Ms Zeng said.

She said she was shocked with electric batons, deprived of sleep for days on end and forced to squat for hours in the sun. She saw an inmate tied for days on a bed, unable to move, causing the flesh on her buttocks and back to rot.

“This kind of abuse was very, very common in the camp,” Ms Zeng said.

She also had to work non-stop from 5.30am until 1 or 2am every day producing sweaters, wallets and soft toys for export to Western countries.

“We knew they were for Westerners because of the larger sizes,” Ms Zeng said. “It wasn’t for Asian people.”

She was also blood tested and given x-rays. With the emergence of evidence that Falun Gong practitioners are killed and their organs harvested, she later realised the significance of those blood tests.

Journalist Ethan Gutmann told of his personal investigation into organ harvesting allegations, and the lack of Western media coverage.

“When charges of organ harvesting came, you can count the number of detailed reports by Western media on it on the fingers of one hand,” Mr Gutmann said.

He interviewed over 100 people and found a large percentage had experienced “expensive and inexplicable blood tests” along with close physical examinations of their corneas, which can be transplanted.

It was strange that these were done without corresponding checks of the mouth, ears and genitals, which would be more important in a physical health check.

He said the regime was at a loss about what to do with tens or even hundreds of thousands of the most stubborn Falun Gong practitioners who refused to “transform”.

“Falun Gong practitioners had become the equivalent of drums leaking toxic waste,” Mr Gutmann said. “They were expensive to keep and too risky to release.”

He said these nameless, dehumanised people were vulnerable targets for organ harvesting.

His investigation was published last year in The Weekly Standard.