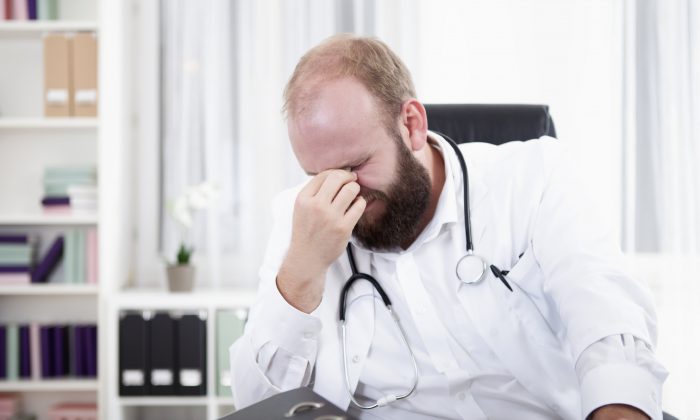 A general practitioner, an ordinary superhero, but under pressure of burnout, depression, and even suicide. (Tuned_In/iStock)
Opinion

Research into the health of health workers is a source of great contention and, often, more than a degree of irony. A new survey of senior hospital doctors suggests that 80 percent are considering early retirement just as the announcement landed that doctors’ union, the British Medical Association, has reluctantly agreed to negotiate compulsory weekend work for consultants—something that is now the subject of an important debate by the government’s petitions committee after a petition opposing a 24/7 health service more than doubled the required 100,000 signatories.

So will a 24/7 health service risk turning doctors into patients? NHS England chief executive Simon Stevens recently announced a 5 million British pounds scheme to improve the health of 1.3 million NHS workers. From healthy eating to fast-tracking mental health services, this is an attempt to address a real problem.

We do know that general practitioners are increasingly vulnerable to burnout and depression.

Something that many of us missed was that this includes a specific health initiative for general practitioners (GPs). We do know that GPs are increasingly vulnerable to burnout and depression—with particular groups such as trainee doctors and women GPs most vulnerable to suicide. But the data around the health of GPs is contested—not least because of the immense difficulties and shame attached to GPs admitting that they can’t make it all better for themselves.

There are systemic problems for GPs: The push for seven-day-a-week surgeries and the creation of the Clinical Commissioning Groups that hold the financial responsibilities of a broken system mean that front-line managers, often untrained to manage clinicians and GPs, are left having to juggle financial and clinical demands that cannot both be met.

As a society we have allowed the job of a general practitioner to become impossible by playing games with health targets—the seven-day openings is just one of these.

As a society we have allowed the job of a GP to become impossible by playing games with health targets—the seven-day openings is just one of these. This provokes an often deeply cynical response from clinicians when there are attempts to build their collective “resilience” through training designed to bolster their toughness, including the ability to “bounce back” from adversity. As 74 percent of GPs say their workload is unmanageable, the current suggestion that they might want to drop a few pounds and go to Zumba might be met with hostility.

As 74 percent of general practitioners say their workload is unmanageable, the current suggestion that they might want to drop a few pounds and go to Zumba might be met with hostility.

GPs hold a difficult position in society. We want them to be authoritative and have all the answers—where they are able to diagnose the tumor, remove it, and cure us. But we also want them to do a more delicate job of healing our minds and bodies, which are both always involved in the process of getting better. This is a delicate procedure requiring sensitivity, diplomacy, and a big dose of humanity.

There is something about GPs that makes them vulnerable. The nature of the training means the career attracts people who make massive demands on themselves—an internal script of “do this now” rather than “what can I realistically do?” For many, medical training is an entry into the cult of perfection where massively bright people become highly vulnerable to fantasies of omnipotence.

It’s also the case that GPs need to adopt a position where they have to do things that patients don’t want them to do. From prescribing medication with unpleasant side effects to encouraging people to give up smoking, the good doctor sometimes has to know best.

At the same time, a doctor cannot always be “emotionally defended,” where they adopt psychological strategies to defend themselves from the pain and anxiety they’re exposed to. Exposure to psychological risk is inevitably part of the job, but their coping strategies could result in doctors losing their curiosity and compassion toward their patients. By being cut off from patients, real problems can be missed. This is particularly the case with mental health, where the psychosomatic complaints we innocently take to our GPs are sometimes code for distress.

The optimum situation would be one where GPs are able to defend themselves psychologically, enough to treat the patient, but not allow those defenses to become so psychologically brittle that they become cut off from their emotions and cease to care.

How Doctors Treat Other Doctors

I had the huge pleasure recently of talking to Clare Gerada—a GP and former chair of the Royal College of General Practitioners who now works with the NHS Practitioner Health Program—and Chris Manning from Action for NHS Wellbeing. These people are of the brave and humane variety, willing to talk about their own states of mind and at the same time having the brass to shout loud at NHS leadership.

Both organizations offer support to doctors but importantly they offer an invitation to GPs to form relationships with each other, where the reality of their situations can be known without shame.

The existence of GP networks, whether it’s at the level of new GP Federations or support groups like these, is not just of therapeutic importance but also of political importance. Because until GPs can openly and collectively challenge the current system of impossible targets, they cannot re-establish a profession worthy of them.

This means moving beyond the individual GP toward developing relationships with the people they work with who are sufficiently strong to challenge the demands being placed on them.

Stevens’s new occupational health scheme is a possible opportunity for GPs but as the crisis deepens, how doctors treat other doctors will matter more.

Elizabeth Cotton is a senior lecturer at Middlesex University Business School in the U.K. This article was previously published on TheConversation.com