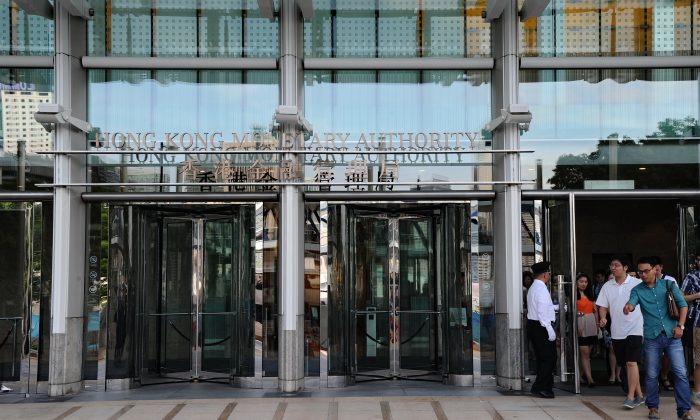 Hidden Behind the Hong Kong Dollar

Huge capital flows into Hong Kong beg the question: Where does the money come from?
By Valentin Schmid

HONG KONG—Recent large interventions in the currency markets by the Hong Kong Monetary Authority (HKMA) beg the question: Where does the money flowing into Hong Kong come from?

It was the first intervention by the Hong Kong Monetary Authority (HKMA) for nearly two years. However, large money flows into Hong Kong prompted it to sell Hong Kong Dollars (HKD) worth $5.64 throughout July in order to keep the rate fixed at HK$7.75 for every U.S. dollar, which has been allowed to trade in a band ranging from HK$7.75 to HK$7.85 since 1983.

It is unusual that the HKMA is intervening with such large sums. One thing is for sure: Money is flowing into Hong Kong and there are several theories as to where it comes from.

Some suspect the money is coming from mainland China, where growth in foreign exchange slowed dramatically in May.

The HKMA has stated in a press release that the influx of money into Hong Kong may be related to the payout in corporate dividends, which usually happens during this season.

Stanley Ng Yuet-ning, former Hang Seng Bank economic researcher and Hong Kong independent financial analyst, said the interventions in July were politically motivated. The central government may have been worried that there would be political conflicts in Hong Kong on July 1, the day of the Hong Kong protest for universal suffrage.

Hong Kong political and economic columnist Liao Shiming, however, believes most of the flows come from mainland China.

Liao cites statistics released by the People’s Bank of China on July 7, which say the growth in new foreign exchange reserves dropped 99 percent to $58 million (361 million renminbi ) in May.

“This means, with the political turmoil in China, the capital is flowing out of China,” he told the Epoch Times.

“My guess is that Hong Kong is a transfer point or a resting point for the outflow of capital from China, and the final destination is some more mature markets overseas,” Liao added.

The general outlook is that mainland China’s economy has reached a crisis, Liao said.

“Many people are most concerned about financial security. Whether they will make a profit is only of secondary importance. Thus, the first step is to move the capital overseas,” he said.

In recent years Hong Kong’s property market and stock market have maintained a high level, which is also related to the influx of capital from mainland China.

“Hong Kong’s economic growth is not good, and the local interest rates are not high, but capital-intensive industries such as real estate and stocks have continued to increase,” said Liao, explaining that people just care about getting money into Hong Kong and don’t care much about valuation or return.

“If the potential to make a profit in Hong Kong does not exceed that in other places in the world, why would international capital flow into Hong Kong? It is obviously not necessary,” he said.

“Thus this capital inflow must come from the mainland,” Liao concluded.

China Central Television (CCTV), a mouthpiece of the Chinese Communist Party (CCP), recently reported that the Bank of China has been involved with money laundering.

The state-owned commercial bank has helped Chinese citizens transfer investment funds overseas in amounts that exceed the limit set by the Chinese regime. CCTV accused the bank of evading the government’s control on cross-border capital transfers. The bank’s governor, Zhou Xiaochuan, has remained silent on the issue.

Liao said: “First, China’s social system does not provide a sense of security to rich people. Second, China’s economic growth has encountered some obstacles. These people definitely want to move their money out of the country.”

He claims the Bank of China’s cross-border transfer service is a procedure that was originally created by the regime.

“They were preparing some methods that would allow some of China’s foreign capital to leave China,” he said.

According to Reuters, the Bank of China firmly stated that the cross-border transfer service is not illegal, so they would not stop the service.

Normally, the Chinese regime limits the amounts individuals and corporation can transfer abroad. Chinese individuals are not allowed to exchange or transfer more than US$50,000 per year.

Chinese companies can convert renminbi to foreign currencies under certain conditions, if they want to invest capital abroad for example.

However, this enclosed system has many loopholes, and the rules are often ignored or overridden. Driven by the economic slowdown and the domestic political instability, prosperous Chinese citizens are increasingly immigrating to the United States, Canada, and Australia by making large investments.

According to China Business News, there are many methods for transferring funds out of China, including “underground banks,” using intermediaries to transfer funds, false trading, or even a visit to the casino city Macau.