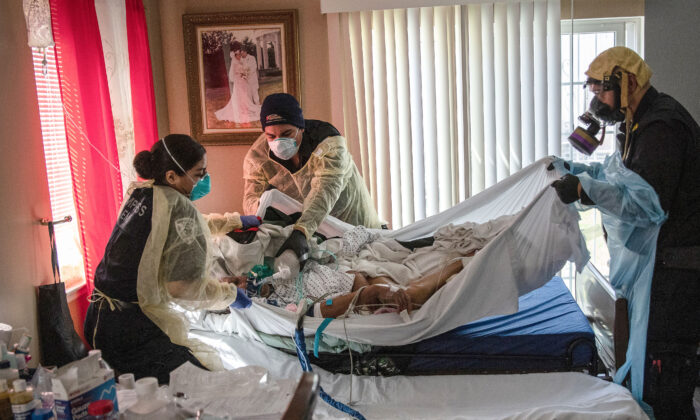 Paramedics and EMTs prepare to transport a gravely ill 92-year-old man with CCP virus symptoms from his home in Yonkers, New York, on April 6, 2020. (John Moore/Getty Images)
By Matthew Vadum

The U.S. Department of Health and Human Services (HHS) has been reminding health care providers that they are legally forbidden from discriminating against elderly or disabled patients when treating those with the CCP virus.

While reports of anyone afflicted with the CCP virus, often known as the novel coronavirus, being denied care for any reason are rare in the United States, there have been news reports about patients in countries with overtaxed health care systems such as those in Italy and Spain being denied treatment during the pandemic because they were older.

Newspapers stateside such as The Arizona Republic have been publishing articles in recent days about disabled patients in this country expressing fear that during the medical triage process they will lose out if they have to compete for scarce resources with other more fully-abled patients.

Sen. Kirsten Gillibrand of New York, and seven fellow Democratic senators including Elizabeth Warren of Massachusetts and Tim Kaine of Virginia, urged the Trump administration in a letter April 10 to protect patients.

“As our health care system struggles with the surge of COVID-19 patients, it’s crucial that the administration provide clear guidelines for equitable care for all Americans,” the letter reads.

The Trump administration did move forward on the issue last month, as the senators acknowledged in their letter.

After reminding the reader that the office enforces laws that prohibit discrimination on the basis of disability in HHS-funded health programs or activities, a little noticed bulletin issued March 28 by the HHS Office of Civil Rights (OCR), stated that “persons with disabilities should not be denied medical care on the basis of stereotypes, assessments of quality of life, or judgments about a person’s relative ‘worth’ based on the presence or absence of disabilities or age.”

California issued a similar bulletin two days later, reminding “health care providers and payers that rationing care based on a person’s disability status is impermissible and unlawful under both federal and state law.”

HHS advised health care providers that they must “keep in mind their obligations” not to discriminate against elderly and disabled patients when prioritizing COVID-19 treatment.

“Persons with disabilities, with limited English skills, or needing religious accommodations, should not be put at the end of the line for health services during emergencies,” OCR Director Roger Severino said in the bulletin.

“Our civil rights laws protect the equal dignity of every human life from ruthless utilitarianism.”

Decisions by providers “concerning whether an individual is a candidate for treatment should be based on an individualized assessment of the patient and his or her circumstances, based on the best available objective medical evidence.”

The initial memo was dated March 23 and was followed up with another memo on April 3.

Attorney Charles LiMandri, special counsel to both the Thomas More Society and the Freedom of Conscience Defense Fund, headed the team that wrote the memos.

“We recognize that doctors must use triage to prioritize treatment and that means having to make difficult choices,” LiMandri said in a statement.

“But rationing health care based on a person’s age or disability is not only unlawful, it is inhumane. We are pleased the Trump administration shares that belief, and we expect the bulletin to reassure doctors fighting at the frontlines of this pandemic.”

Separately, in an interview with The Epoch Times, LiMandri said, “If any hospitals are getting federal funding, and I understand they pretty well all are, they could lose that funding, at the very least, if they’re found in violation of federal law.”

While age “is not irrelevant” in triaging, it is important to make clear that “you just can’t have a numerical age cutoff,” he said.

But since the predictions of mass death have fallen short, making life-and-death decisions based on scarce resources has not become much of an issue during the pandemic in the United States.

“Now, fortunately, the way it’s turned out, the coronavirus is not having the bad impact that we thought it might in terms of rationing … so we’re hoping that these issues addressed in these memos at this point are going to be more theoretical than real, at least in the current crisis.”

“We’ve got to be really careful about drawing lines [regarding] whose lives are worth saving and whose aren’t worth saving,” LiMandri said.