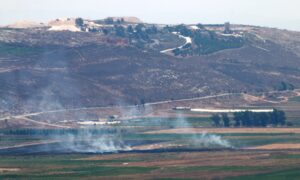 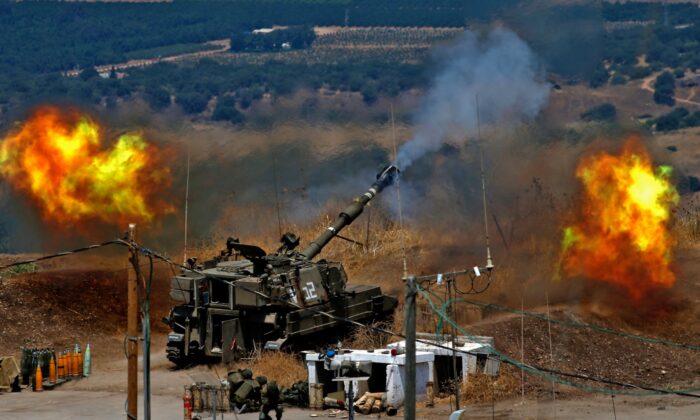 Israeli self-propelled howitzers fire towards Lebanon from a position near the northern Israeli town of Kiryat Shmona following rocket fire from the Lebanese side of the border, on Aug. 6, 2021. (Jalaa Marey/AFP via Getty Images)
Middle East

Hezbollah Terrorists Launch Barrage of Rockets Into Israel as ‘Retaliation’

Lebanese terrorists confirmed on Friday it has launched a heavy barrage of rockets as a response to attacks at an artillery launch site in southern Lebanon by the Israeli military a day earlier.

Hezbollah, an Iran-backed designated terrorist organization, said in a statement the attack with nearly 20 rockets was a retaliation to Thursday’s Israeli airstrikes, which destroyed infrastructure used in past terror attacks on Israeli territory as well as launch sites from which Lebanese rocket attacks originated on Wednesday.

The Israeli Defense Forces (IDF) said 10 of 19 rockets were intercepted by the Iron Dome system, while several rockets landed in open areas. There were no reports of damage or casualties.

“If Hezbollah wanted to carry out a significant response, they have the ability to do so,” Kohav said.

It was the third day of cross-border hostilities that threaten a period of calm prevailing since 2006, when Israel and Hezbollah fought a one-month war. This is the first time Hezbollah has fired rockets on Israeli territory and has publicly taken responsibility since the war. Israel said it did not wish to escalate to a full war, though it was ready for one.

The U.N. peacekeeping force deployed along the Lebanese-Israeli border said it has detected rocket launches from Lebanon on Friday, and return artillery fire by Israel.

“In response to the 10+ rockets just fired at Israel from Lebanon, we are currently striking the rocket launch sites in Lebanon,” the Israeli army said in a statement.

Israel launched retaliatory shelling and airstrikes on Thursday in response to rockets fired from Lebanon a day earlier and for which no group claimed responsibility yet.

The rockets came from an area of south Lebanon under the sway of Iranian-backed Hezbollah guerrillas and caused several brush fires. Hezbollah’s al-Manar TV has reported on the Thursday attacks from Israel, but the terrorist group itself was yet to issue any statement.

Israel faces threats from Hezbollah along its northern border where Hezbollah has placed about 150,000 rockets aimed at Israel, according to a 2019 U.S. State Department report (pdf).

During the 1980s there were more than a dozen militias in Lebanon but after the Lebanese Civil War ended in 1990 all militia groups surrendered their arms to the government except Hezbollah which kept its weapons, Dr. Edy Cohen, Ph.D. at Bar-Ilan University in Israel and an expert on the Middle East at the Begin-Sadat Center for Strategic Studies told The Epoch Times in an interview.

Hezbollah’s leaders are Lebanese but the group has had very close ties to Iran for years. It carries out Iranian instructions, and receives financial support, intelligence, and materiel from Iran, Cohen said. Since the end of the Civil War, for about 30 years, Hezbollah has treated itself as a country inside a country, he added.

“Iran continues to provide Hezbollah with most of its funding, training, weapons, and explosives, as well as a political, diplomatic, monetary, and organizational aid,” according to the State Department report on terrorism for 2019 (pdf).

Ella Kietlinska and Reuters contributed to this report.