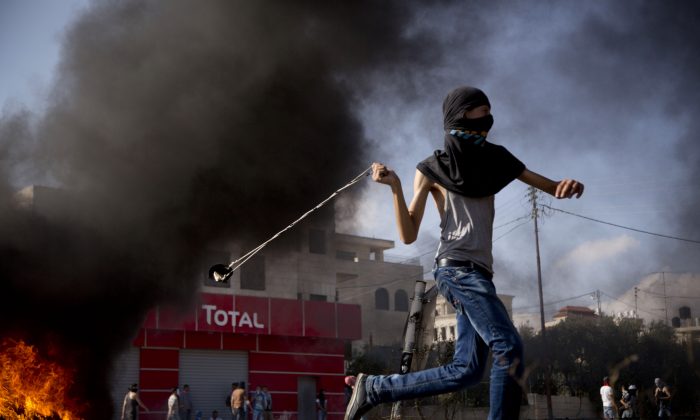 A Palestinian hurls a stone during clashes with Israeli troops near Ramallah, West Bank, on Oct. 14, 2015. Violence quickly spread across Israel and into the West Bank and Gaza Strip after clashes erupted last month over tensions regarding the Al-Aqsa Mosque compound in Jerusalem's Old City. (AP Photo/Majdi Mohammed)
Middle East

JERUSALEM—The latest developments in a wave of Israeli-Palestinian violence (all times local).

Israeli police say an attack at a bus station in southern Israel was carried out by one attacker, not two.

Police commander Yoram Halevy says officers at the bus station mistakenly opened fire on a foreigner during the attack Sunday, apparently thinking he was an assailant. The man was wounded.

Halevy told reporters that the incident is being investigated. Israeli media say the foreigner is an Eritrean national.

Halevy says the attacker entered the bus station with a gun and a knife and then snatched another gun from one of his victims. He was later killed.

Police had said earlier that two attackers opened fired on the bus station. One Israeli was killed and several others were hurt.

Israeli police say several Israelis are wounded in a suspected shooting attack at a bus station in southern Israel.

Police spokeswoman Luba Samri says shots were heard coming from the bus station in Beersheba on Sunday. She says an attacker has been killed.

Israeli police say they have set up a concrete barrier between a Jewish and an Arab neighborhood in east Jerusalem amid soaring tensions.

Police spokeswoman Luba Samri says Sunday the slabs were placed there for security reasons, without elaborating.

Israeli media showed footage of a crane lowering the slabs between the Arab neighborhood of Jabal Mukaber and the Jewish area of Armon Hanatziv. Rocks and firebombs have often been hurled from the Arab area at houses in the Jewish neighborhood.

Israel has taken unprecedented measures to try to quell a monthlong spate of violence. It has deployed soldiers in Israeli cities and erected concrete barriers and set up checkpoints outside some Arab neighborhoods of east Jerusalem, where most of the attackers have come from.

Pope Francis is calling for “much courage and much strength of spirit” to bring an end to violence between Israelis and Palestinians.

The pope told followers during the traditional Angelus blessing on Sunday that he is following with great concern “the situation of strong tension and violence afflicting the Holy Land.”

He said the moment called for “much courage and much strength of spirit to say no to hatred and revenge” and seek peace instead.

Palestinian assailants have been carrying out near-daily stabbing attacks against Israelis in violence fueled by rumors that Israel is plotting to take over Jerusalem’s most holy site.

At the end of the Angelus, which capped a canonization Mass in St. Peter’s Square, the pope greeted followers from the pope mobile.

The leader of Lebanon’s Shiite Hezbollah group has called the violent unrest in Israel a “renewed intifada,” describing it as the hope for salvation for the Palestinians.

Nasrallah’s remarks were broadcast Sunday. He said the wave of attacks against Israelis was carried out by a “new generation” of Palestinians who believe in “resistance” and who must be supported by all in the region.

Palestinian assailants have been carrying out near-daily stabbing attacks against Israelis that have spread from Jerusalem to elsewhere in the country.

Over the past month, eight Israelis have been killed in Palestinian attacks, most of them stabbings. In that time, 40 Palestinians were killed by Israeli fire, including 19 labeled by Israel as attackers, and the rest in clashes with Israeli troops.

Nasrallah said: “It is everyone’s responsibility to stand by it and help it, each with their own capabilities, abilities and circumstances.”

Israel and Hezbollah fought a month-long war in 2006. They remain bitter enemies.

Israel’s prime minister says his government is going to go after the finances of the Islamic Movement in Israel, a group he accuses of being the chief inciter of the recent violence.

The violence erupted a month ago over the Jewish New Year, fueled by rumors that Israel was plotting to take over Jerusalem’s most sensitive holy site, a hilltop compound revered by Jews as the Temple Mount and home to the Al-Aqsa Mosque, Islam’s third-holiest site and a key national symbol for the Palestinians.

Israel has adamantly denied the allegations, saying it has no plans to change the status quo at the site, where Jews are allowed to visit but not pray.

Israel accuses the Palestinians of inciting to violence through the false claims. Palestinians say the violence is the result of nearly 50 years of Israeli occupation, more than two decades of failed peace efforts and a lack of hope for gaining independence anytime soon.

The Israeli military says it has removed dozens of Jewish worshippers who illegally entered a biblical shrine in the West Bank that was recently torched by Palestinians.

The military says some 30 Jews descended early Sunday upon the Joseph’s Tomb compound in Nablus, a site revered by Jews as the tomb of the biblical figure Joseph. The military said they had no permit. When they arrived they were confronted by Palestinians and a violent clash ensued. In consultation with Palestinian security forces, the military extracted the worshippers. One of them was lightly wounded and five were taken for police questioning.

Sunday’s incident comes after another bloody day in which Palestinian assailants carried out five stabbing attacks against Israelis in Jerusalem and the West Bank, as a month-long outburst of violence showed no signs of abating.

Over the past month, eight Israelis have been killed in Palestinian attacks, most of them stabbings. In that time, 40 Palestinians were killed by Israeli fire, including 19 labeled by Israel as attackers, and the rest in clashes with Israeli troops.