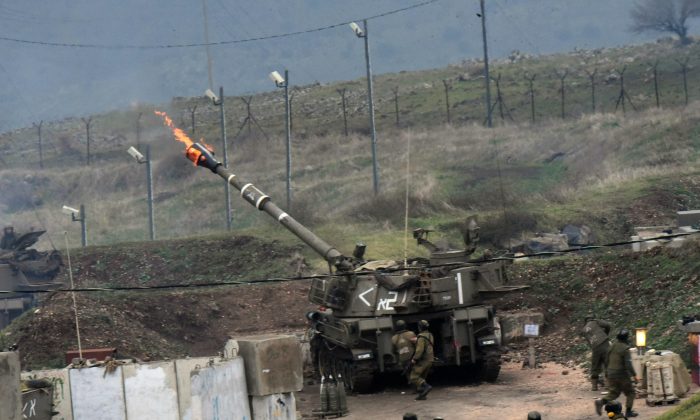 BEIRUT—Lebanese militant group Hezbollah struck an Israeli armored patrol with a roadside bomb at the border on Monday and Israel responded by shelling the area, with no immediate word on casualties.

Hezbollah said the attack was carried out by a unit named for Samir Kantar, a prominent Lebanese militant killed in Syria last month. Hezbollah had blamed Israel and vowed to avenge his death, suggesting a possible motivation for Monday’s attack.

Hezbollah said it set off a large explosive device as the vehicles passed in the disputed Chebaa Farms area, destroying a Humvee and causing casualties among the soldiers inside.

The Israeli army said vehicles in the area were hit with an improvised explosive device and that it responded with targeted artillery fire. It did not say whether there were any casualties.

Hezbollah’s television channel Al-Manar said one of the vehicles targeted was carrying “a senior officer.”

Tensions on the border have been high since Kantar, who carried out a notorious attack in Israel and spent nearly 30 years in an Israeli jail, was killed in Syria by an airstrike late last month.

Border skirmishes between Israel and Hezbollah have quickly escalated into all-out war in the past, with one cross-border raid by the group in 2006 touching off a month-long Israeli offensive that included a ground invasion and airstrikes that reached across all of Lebanon.

But with Hezbollah currently engaged in the Syrian civil war on the side of President Bashar Assad, and Israel free to target the group in porous Syrian airspace, both sides seem too occupied elsewhere to opt for a new war in Lebanon.

Hezbollah Chief Says Group Will Strike Back at Israel

Later Monday, Lebanese security officials said that more than 50 Israeli shells hit several villages in the area where the Hezbollah operation was carried out. Residents along the border said shelling from Israeli tanks and artillery landed in agricultural areas inside Lebanon, but did not report casualties.

The officials said the patrol was hit near an Israeli army position in the Kfar Chouba hills, which Beirut says is Lebanese land occupied by Israel. The residents requested anonymity, saying they feared for their safety, while the officials did so in line with regulations.

The United Nations force in Lebanon known as UNIFIL said in a statement that it has further reinforced its presence on the ground and intensified patrols in coordination with the Lebanese army.

“UNIFIL has launched an investigation to determine the facts and circumstances of the incident,” the statement said.

The statement quoted UNIFIL’s Head of Mission, Maj. Gen. Luciano Portolano, as saying calm has been restored in the area and “the parties have reassured me of their continued commitment to maintain the cessation of hostilities.”

Just a day earlier, Hezbollah leader Hassan Nasrallah vowed to avenge the killing of Kantar, who was the longest serving Lebanese prisoner in Israel before he was released in exchange for the bodies of two Israeli soldiers killed in the raid that kicked off the 2006 war. Kantar joined Hezbollah after being released by Israel in 2008.

Kantar was killed on Dec. 19, along with eight others, in an airstrike on a residential building in Jaramana, near the Syrian capital of Damascus.

Israel has neither confirmed nor denied carrying out the airstrikes.