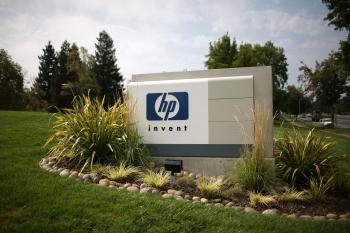 The HP logo is displayed on the entrance to the Hewlett-Packard Headquarters in Palo Alto, California. (Justin Sullivan/Getty Images)
Business & Economy

Hewlett-Packard to Buy Autonomy, Shift Towards Software and Cloud

Ram Srinivasan
View profile
Follow
biggersmaller
Print
Hewlett-Packard (HP), the $120 billion behemoth that has long been regarded as a computer hardware and systems company, is now headed into completely different territory: that of a software company.

At least, that’s what the slew of announcements that HP made on Wednesday just before market close seemed to indicate. HP stated that it was considering "a full or partial separation" of its consumer PC and devices operations, indicating that it was looking to sell off its devices division. HP also said that it was looking to buy U.K.-based software company Autonomy for $10 billion.

HP also made some annoucements about its Q3 earnings, saying that it had slightly reduced its full-year sales outlook to about $127 billion, a little lower than its previous estimate. It posted Q3 earnings of 93 cents a share, about 10% lower than Wall Street estimates, on $31.2 billion in revenue.

HP confirmed that it would be discontinuing its webOS-based tablets and smartphones. HP had acquired webOS from Palm Inc for $1.2 billion in April 2010, but that decision has turned out to be a difficult one for HP as it struggled to position the webOS-based devices as an alternative to Apple’s iPhone and iPad and the slew of Android-based devices.

In the meantime, HP also made an announcement that it is close to buying Autonomy, a British software company which describes itself as a "leader in meaning based computing and enterprise search." Reuters reported that Autonomy is currently valued at "above $6 billion".

The purchase of Autonomy and the spinoff of its PC business will put HP squarely in the services and software sector, very much like former rivals IBM, which moved away from being the No. 1 PC maker to a software and services company very successfully.

The hardware industry has stagnated in recent years as vendors find it hard to eke a profit as they used to earlier. Profits in the industry are reported to be in the single-digit percentages, and growth has been slow.

HP CEO’s Leo Apotheker is known to be pragmatic coming from the software industry. The 58-year-old former CEO of SAP AG, a German software company that provides Enterprise Resource Planning (ERP) and other software, had indicated in March 2011 that he wanted to move the company more into services and cloud computing, where profit margins are higher.

Hewlett Packard shares were down in trading by the end of the day.