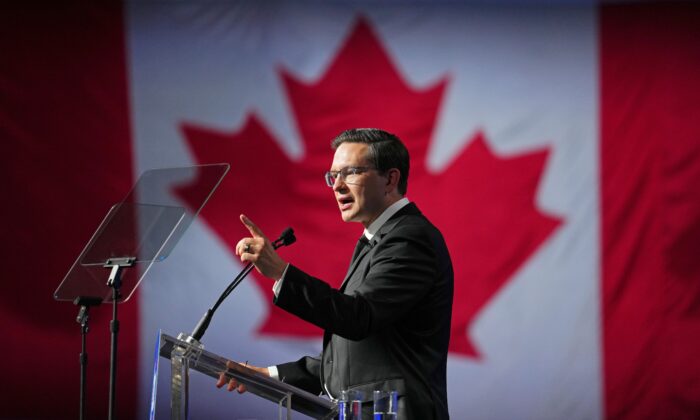 In a windy shopping mall parking lot in Saskatoon on Sept. 12, it wasn’t hard to find people who are pleased Pierre Poilievre has become the new leader of the Conservative Party of Canada.

“I’ll vote for him for sure,” said Sean Hutchinson, looking ahead to the next federal election. “Anything to get Trudeau out.”

“I believe he’s our best chance to get back working, get back as a country,” said Parchoma. “Our gas, our oil, our forestry, there’s got to be something we can work better with the [United] States on,” he said.

The two men reflect some of the disenchantment in the resource industries of Western Canada, where many blame federal policies for hindering economic growth.

But even here, it wasn’t a slam-dunk for Poilievre.

“What I would like to hear is specifics about what he’s got planned,” said Dion Engele. “He’ll say, oh, we’re going to cut inflation. How? Don’t give me this jumbo-jumbo generalities—say something specific, tell us what you stand for, and then I can make a decision on whether I want to vote for you or not.”

After Poilievre’s victory on Sept. 10, the premiers of both Saskatchewan and Alberta tweeted their congratulations to the new Conservative leader.

“Congratulations to my friend @PierrePoilievre on his election as Leader of the Conservative Party of Canada, and Leader of His Majesty’s Loyal Opposition,” Alberta Premier Jason Kenney wrote.

It’s another indication of the fairly warm relationship between the Conservative Party and the Prairie provinces. In Saskatchewan, the party holds all 14 federal seats, and 30 of 34 seats in Alberta. In Manitoba, the Tories hold half of the 14 seats.

Given all that, Daniel Westlake, an assistant professor in political studies at the University of Saskatchewan, said Poilievre’s election likely doesn’t mean much will change regarding Conservative support in the region.

“The reality is that the Conservatives are in a very good place in Western Canada, regardless of who the leader is,” Westlake said in an interview.

The challenge, he said, is for the party to make inroads in places like suburban Ontario and B.C.’s Lower Mainland.

“They basically need to find a way to win the support of voters who would vote Liberal federally in places like suburban Ontario but are persuadable conservatives and may have voted Conservative in the [June] provincial election,” said Westlake.

“Those voters certainly exist,” he added. “Ridings in and around the Windsor area, working-class ridings, did turn Conservative in the Ontario provincial election.”

Opposition to Poilievre’s win came soon after he was announced the new Tory leader, with Prime Minister Justin Trudeau saying on Sept. 12: “Buzzwords, dog whistles, and careless attacks don’t add up to a plan for Canadians.”

“While Mr. Poilievre talks loudly about inflation, he cannot be counted on to push companies to increase workers’ pay to keep up with skyrocketing inflation,” CLC president Bea Bruske said in a press release. “Pierre Poilievre cannot be trusted now to repair our broken health care system, help struggling families or stand up for workers.”

Poilievre focused much of his leadership campaign on the economic challenges facing ordinary Canadians, such as the price of housing, and inflation hovering close to 8 percent.

Westlake says with the agreement between the Liberals and NDP, the next federal election could be as much as three years away—and by then conditions could be very different.

“You never quite know if it’s going to work until you see the election, and see what the outcome is,” he said.

But for people like Lori, who did not want to give her last name, Poilievre is a breath of fresh air.

“I absolutely love him,” she said. “He’s so eloquent, he explains things so well. … The thing is he understands what’s happening in Canada, and what needs to happen.”