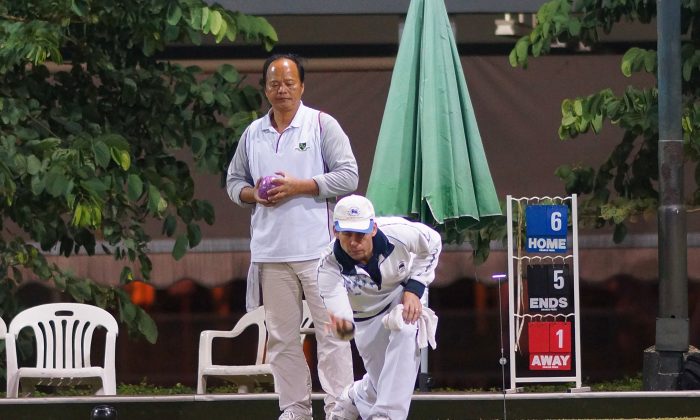 HONG KONG—Neil Herrington from the Hong Kong Football Club won his first National title after beating Filipino Club’s Jason Li in one of the fastest finals of the National Knock-out Singles on Sunday, Dec. 14.

Herrington, a 48-years-old accountant who brought his bowling skill to Hong Kong 14 years ago, is ecstatic after lifting his first ever title at Club de Recreio, “Last month I and partner Derek Wyllie were defeated in the final of the Indoor Pairs at the indoor greens at Club de Recreio, it is nice that I won this at the outdoor green of the same club.”

His route to the final was a difficult one. In the fifth round he met Hong Kong international Tony Cheung, who had just returned from the Asian Championship with two gold medals. The game was tight and Herrington narrowly edged out Cheung 13:12 at the end.

In the Quarter-finals he faced the defending champion Timmy Kwong from Kowloon Cricket Club. Again the game was close and Herrington came out victorious at 13:9.

Awaiting Herrington at the semi-finals was China International Terrence Lee from the Kowloon Bowling Green Club. Lee was leading for a large part of the game, but got stuck when the score was 13:9. Herrington came from behind to take the game 17:13.

In the final against Jason Li of Filipino Club, Herrington quickly opened up a lead of 11:1, but Li demonstrated a high level of fighting spirit to crawl back to 11:8. However such effort was not enough to stop Herrington from winning as he took the next two ends to kill the game 17:8.

Herrington attributes his success to the calmness he displayed throughout the tournament, “I was very calm today. I told myself not to think about winning and what I need to do is to play well, which I did today. He came back very well and had some really good ends, but I just kept the momentum to win it.

“In the Novice Singles final four years ago, I lost because I wasn’t calm. I knew I should have won it and I was expecting to win, as opposed to expecting to play well. And that’s what I made myself do today, just to play well,” said Herrington. Obviously this was a lesson well-learned.

Li, who had to settle for the runners-up, believed that his loss is due to a lack of experience: “I was never in a final of a national competition before so it made me a bit nervous.

“The long day also affected my performance because I am really tired at the last game. A lot of the shots that usually work did not bring any results in the final. This was best illustrated in the last end of the game. Throughout the day I have been playing the same shot and getting good results. But this shot just did not follow my expectation so I lost,” said Lee.

In what was arguably the most grueling lawn bowls competition held to date, the 142 entrants started at 9.00 am on Sunday morning at 8 venues, with the games from the last 16 onward being played at Club de Recreio. While the final players need to play up to seven games within a day, they also need to adapt to the ever-changing weather, from the cool morning to the warm afternoon then the chilly evening. In the past few years it has recorded a finishing time of 1:00 am but the progress of this year’s competition was at a faster pace, with the Final finishing at 8:30 pm.