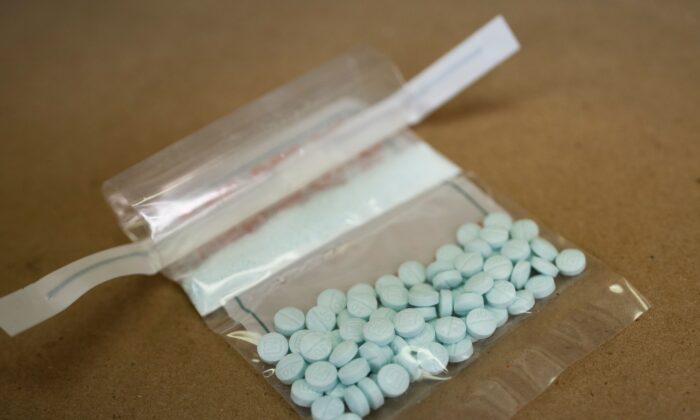 “The Faces of Fentanyl" wall, which displays photos of Americans who died from a fentanyl overdose, at the Drug Enforcement Administration (DEA) headquarters in Arlington, Va., on July 13, 2022. (Agnes Bun/AFP via Getty Images)
US News

Fentanyl has displaced heroin as the leading cause of overdose deaths in the United States. Not only have overdoses involving fentanyl skyrocketed over the past years, but those involving heroin have actually dropped by about a half, according to estimates by the Centers for Disease Control and Prevention (CDC).

Overdoses involving heroin, on the other hand, dropped from more than 16,000 five years ago to some 8,000 in the 12 months ending March. The last time heroin-involved overdoses exceeded fentanyl ones was in 2016.

The numbers partly overlap because overdoses that involved multiple drugs are counted for each.

Drug overdoses have been for years, by far, the top cause of death for 25- to 44-year-olds. In 2020, accidental drug poisoning deaths exceeded traffic deaths by more than three to one in this age group, according to CDC mortality data.

Fentanyl, a highly addictive pain killer, is roughly 30-50 times more potent than heroin. About 3 milligrams is enough to kill an adult. The majority of it is made in China or synthesized from precursor chemicals supplied from China. It’s then smuggled to the United States either directly or via the southern border.

Because it’s cheap, fentanyl is sometimes mixed into heroin to increase the potency of the street drug. In recent years, drug traffickers have often been pressing fentanyl into small blue pills stamped “M30” to resemble the color and markings of prescription opioid painkiller oxycodone.

“Fake prescription pills are easily accessible and often sold on social media and e-commerce platforms, making them available to anyone with a smartphone, including minors,” the agency said in a December 2021 fact sheet (pdf).

About two in five of the fentanyl-laced pills contained a potentially lethal dose, it said.

The Chinese Communist Party has been using fentanyl trafficking as a form of chemical warfare against America, according to experts on the regime’s unconventional warfare tactics.

Breitbart reported in 2019 that Mexican authorities seized a shipment from China carrying 25 tons of fentanyl—enough to kill every human on the planet.