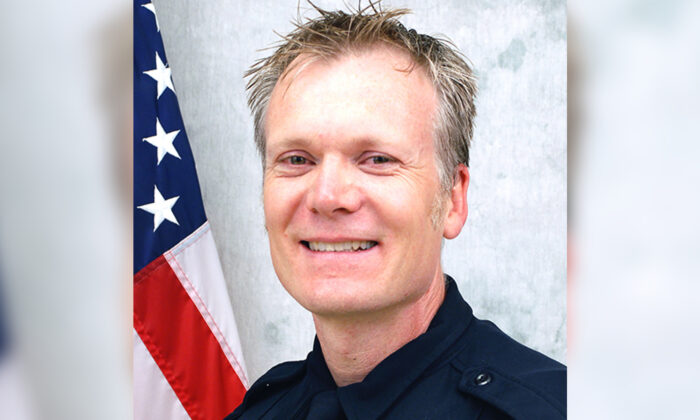 A witness to a shooting in Colorado said that a “heroic” man confronted and shot an alleged gunman in the Denver suburb of Arvada on June 21.

Three people died in the shooting, including a veteran police officer, the shooter, and an onlooker. Police told reporters on June 22 that the officer, 51-year-old Gordon Beasley, was targeted by the gunman because of his police uniform and badge.

Troyanos said that on June 21, he was working at a store in Olde Town Arvada when Hurley, a store patron, ran outside with a gun in his hand after shots were heard fired outside the store.

“He did not hesitate; he didn’t stand there and think about it. He totally heard the gunfire, went to the door, saw the shooter and immediately ran in that direction,” Troyanos told the outlet. “I just want to make sure his family knows how heroic he was.”

Troyanos said he witnessed Hurley confront the gunman and said he heard five to six shots, after which the gunman fell against a parked vehicle.

Detective Dave Snelling told AP on Wednesday that Troyke had reportedly left behind a note that contained threats against Arvada police officers.

Authorities have yet to clarify who shot Hurley or the gunman.

In a statement on Twitter Wednesday, Arvada Police Department said there are “still several unanswered questions” and that they have yet to finish interviewing all of the witnesses, and are waiting on forensic evidence.

“We owe a thorough and complete review of the incident to both Mr. Hurley’s family and Officer Gordon’s family,” the department said. “We are aware of information from the suspect which clearly shows this suspect targeted and sought out to kill Arvada police officers.”

It added: “We cannot release any documents related to the open investigation at this time. If not for the heroic actions of Mr. Hurley and Arvada Police Officers on that day, more innocent lives would have been lost.”

The department also shared a link to a GoFundMe page set up by Brian Romero, a friend of Hurley’s family, to help cover his funeral costs. According to the page, Hurley “loved the outdoors, had a passion for food and cooking, and loved spending time with family even briefly when possible.”

Arvada Police Department previously pointed to the Colorado Hero Foundation’s website as “the only official donation site for the fallen officer” for those who wish to make donations for Beasley, a 19-year veteran of the department.

Arvada Police Chief Link Strate said on June 22 that Hurley was a “true hero who likely disrupted what could have been a larger loss of life.” He also said that Beasley “was ambushed by a person who expressed hatred of police officers.”

Hurley’s sister Erin wrote on Facebook that Hurley had “acted without hesitation and possibly saved many lives while sacrificing his own.”