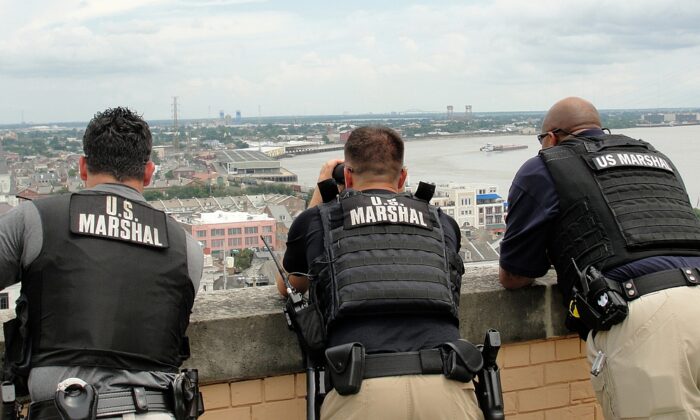 U.S. Marshals stand on a building as they look out toward the city in a file photo. (Illustration - Elliott Cowand Jr/Shutterstock)
Viewpoints

Over the past few months, while many of us were preoccupied with politics and the pandemic, U.S. Marshals bravely carried out a series of nationwide operations that rescued hundreds of human trafficking victims in at least seven states.

These victimized women, runaway youngsters, and children had been enslaved into a dangerous and deadly lifestyle by criminals who used their captives’ bodies to enrich themselves.

I’m betting you probably didn’t hear much about this. In a time when it’s popular to bash anyone with a badge, teams of Marshals quietly joined with dozens of other federal, state, and local law enforcement officers to liberate these lost souls.

Not only were victims saved during these sweeps, but their captors were also arrested and charged with multiple felonies that could mean years in prison. These raids, with names such as “Operation Not Forgotten” and “Operation Patriot,” were carried out in places you would think were relatively safe.

In Ohio—primarily in Toledo, Cleveland, and Columbus—“Operation Autumn Hope” recently liberated 109 trafficking survivors, including 76 children. Among the 179 suspects arrested were both captors and johns looking to buy sex, often with a minor. That operation followed the August rescue of another 25 children under the age of 18.

In the same state, but not connected to the Marshals’ operations, a former Portsmouth city councilman and attorney was recently arrested and charged with 18 felony counts of promoting and compelling the prostitution of nearly 30 women, several of whom faced drug charges and came to him seeking legal representation. Michael Mearan, 74, now faces up to 70 years in prison.

The Cincinnati Enquirer published an investigation into Mearan’s activities last year reporting that, for decades, he had supplied his young female clients with drugs “in exchange for and as an incentive to participate in acts of prostitution.” One woman who worked for Mearan was found dead of “multiple traumas” in 2013. Another woman has been missing since that same year.

This isn’t a problem unique to the Buckeye State. If you think this couldn’t be happening in your area, realize the National Center for Missing and Exploited Children says incidents of child sex trafficking have been reported in all 50 states.

In Georgia, “Operation Not Forgotten,” carried out by U.S. Marshals and a task force of federal, state, and local agencies, recently located 39 missing children ages 3 to 17. Many were victims of sex trafficking. Nine suspects were arrested.

In Fort Bend County, Texas, near Houston, “Operation Patriot” resulted in the rescue of five human trafficking victims and the arrest of 46 suspects, both those who offered up the victims and those who paid for sex. The local district attorney, Brian Middleton, warned that authorities will continue to be “relentless” in their pursuit of criminals on both the “supply” and the “demand” side of this crime.

In Missouri, to date this year, there have been 36 rescues and 106 arrests. The latest case stemmed from suspicious incidents at an Interstate 70 truck stop in tiny Oak Grove, east of Kansas City. Local police were able to rescue 10 women and three small children who are now in state care. The state’s attorney general says his next sex trafficking target is Missouri’s illicit massage industry.

Sex trafficking doesn’t just happen in faraway countries. It is happening right here in the United States to the most innocent and vulnerable among us.

The U.S. Marshals Service, established in 1789, is the nation’s oldest federal law enforcement agency. In 2015, the service was authorized to assist in locating and recovering missing children. Today, the Marshals say their state-by-state operations to cripple this modern-day slave trade are ongoing.

It’s easy to miss law enforcement’s good works. I didn’t want that to happen with this mission.