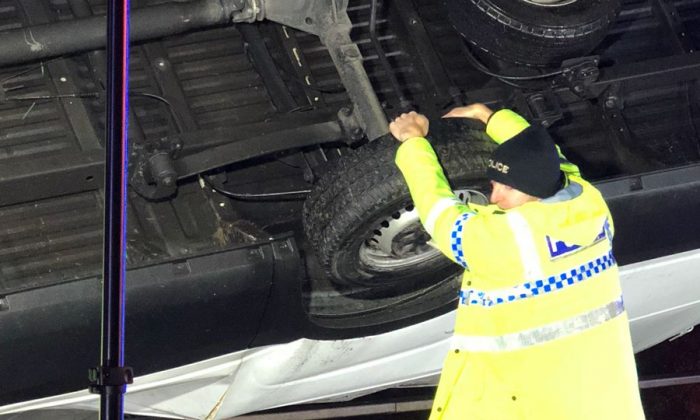 PC Martin Willis clung on to a van that was hanging off a motorway with his bare hands before emergency services arrived. (West Yorshire Police)
UK

A police officer has been hailed a hero after he single-handedly held on to a van that was teetering over a  motorway bridge.

PC Martin Willis was pictured holding on to the van that was hanging precariously over a A1 motorway bridge in West Yorkshire in the early hours of Friday Dec. 1.

He held the van with his bare hands for 15 minutes as he waited for local authorities to arrive and rescue the trapped motorist inside.

PC Martin Willis, also known as “Motorway Martin” to his followers, tweeted, “I couldn’t begin to describe my relief when @WYFRS (West Yorkshire Fire and Rescue Service) arrived on scene!”

1st on the scene of this collision on the #A1M this morning and faced with a vehicle balancing over the edge of a bridge with the driver trapped! After holding on to the vehicle to stop it swaying in the wind I can't begin to desribe my relief when @WYFRS arrived on scene! pic.twitter.com/E8ilktlOl7

The van appeared to have veered off track in icy conditions on the motorway and Willis was first on the scene.

“I just saw this van on top of the bridge through the railings and contacted control to say, ‘I’ve got to stop here, this looks very serious,” he said.

He walked on to the hard shoulder to the incident, and another driver shouted across to him to say there was a motorist trapped in the van.

“Every time a lorry went by I could see the van sway and I just thought, ‘It’s right over the A64, if this van goes over it will kill the driver.’ Of course you’re also thinking ‘any minute now, something is going to come on the hard shoulder and hit me!’”

“I told the victim not to panic and said ‘we’re going to get you out of there, whatever you do, don’t move.’ I then grabbed hold of the rear wheel and pulled inwards which helped to keep the van balanced. I was there for a good 15 minutes I think.”

Emergency services worked incredibly hard together this morning to rescue the driver of this vehicle on the A1 (M). The male casualty is recovering in hospital after what must have been a terrifying ordeal – we wish him well. @YorkshireHart @WYP_RPU @YorksAmbulance pic.twitter.com/vNfQ6gW9Ma

After West Yorkshire Fire and Rescue Service arrived on the scene, they took about two hours to help the trapped motorist by using a winch to stabilise the van and pulling it to safety.

People reacted to the police officer’s heart-stopping actions on social media, with PC Adam Pace writing, “How on earth did you manage to do all this and get a photo? Awesome work.”

One person commented, “You sir are a hero. Well done.”

Another user wrote, “That must’ve been a heart stopping moment!! Well done for holding on, and helping to save that driver’s life.”

The driver was in serious, but not life-threatening condition and taken to Leeds General Infirmary, according to West Yorkshire police.

If you enjoyed reading this article, please consider supporting our independent journalism by sharing it on your social networks.