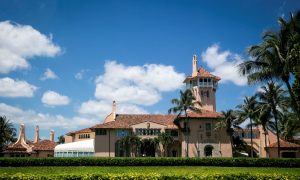 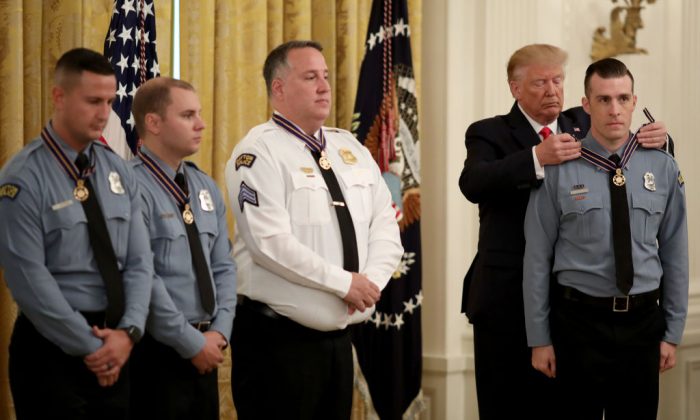 President Donald Trump presents the Medal of Valor to Officer David Denlinger of the Dayton Police Department during a White House ceremony in Washington on Sept. 9, 2019. (Win McNamee/Getty Images)
US News

Six police officers who took down a gunman before he entered a Dayton bar on Aug. 4 received the Medal of Valor, the nation’s highest public safety award.

In addition, Trump presented Certificates of Commendation to five civilians for their “tremendous bravery” during a mass shooting on Aug. 3 at a Walmart store in El Paso.

“These incredible patriots responded to the worst violence and most barbaric hatred with the best of American courage, character, and strength,” Trump said at a White House ceremony.

“Faced with grave and harrowing threats, the men and women standing behind us stepped forward to save the lives of their fellow Americans. Few people could have done and even would have done what they did.”

A mass shooting occurred in August at a busy nightlife neighborhood in Dayton, killing nine people and injuring 27 others. The six police officers fatally shot the gunman within 32 seconds after he opened fire on people gathered outside a bar in Dayton’s historic and popular Oregon District. The officers stopped the shooter before he made his way into the bar, saving hundreds of lives.

Hours before the Dayton shooting, a gunman opened fire at a Walmart store in El Paso, killing 22 people and wounding 24 others.

“Our nation is shocked and enraged by these inhuman and sadistic acts of bloodshed,” Trump said. “We fail to comprehend how any person could be so warped by malice and contempt.”

Trump honored five civilians who risked their lives to save others during the Walmart shooting, including Robert Evans, Walmart store manager; Gilbert Serna, a Walmart employee; Marisela Luna, manager of the McDonald’s store inside the Walmart; Angelica Silva, a supervisor at McDonald’s; and Chris Grant, a Walmart customer.

Trump praised the officers and civilians for their heroic actions, calling them “unbelievably exceptional Americans.”

Speaking at the ceremony, Attorney General William Barr said that the medal of valor was normally presented to an individual or individuals once a year, but the law permitted the attorney general to expand the total number of recipients when exceptional instances of bravery arise.

“It’s an honor to serve under a president who is so strongly supportive of law enforcement and has the back of police officers and first responders,” Barr said.