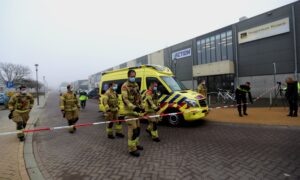 A hero cat warmed a baby who was left out in the cold by climbing into his box.

The child was dumped in Obinsk, Russia.

Irina Lavrova, 68, lives in the town. She was throwing out the trash when she heard the cat, Masha, meowing near the bins.

Much to her surprise, she discovered the baby boy.

“Masha is a communal cat who everyone takes turns in looking after,” she said, reported the Mirror. “She is very placid and friendly so when I heard her mewing I thought that perhaps she had injured herself because normally she would have come and said hello to me.

“You can imagine my shock when I saw her lying in a box next to a baby. Clearly her mothering instincts had taken over and she wanted to protect the child. He was well-dressed with a little hat and whoever left him here had even left a few nappies and some baby food.”

The cat was curled around the freezing child and licking his face, reported the Daily Mail.

The boy was taken to the hospital, where he was given a clean bill of health.

Police have launched a search for the parents while Masha has been spoiled with food from area residents.