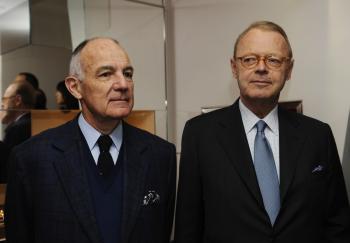 Hermes executive Bertrand Puech, a member of the extended Hermes family, said that "LVMH will not be able to take control of the group" in remarks to the newspaper Le Monde.

A holding company was recently created that preserves more than 50 percent of the shares in Hermes, which is an outright maneuver to prevent LVMH from gaining greater ownership of the family owned French brand.

In October, LVMH, the world’s largest luxury conglomerate acquired a 17.1 percent stake in Hermes, which raised the alarm for the Birkin bag makers. LVMH is now the second largest shareholder in the family run business.

Although Arnault claimed that LVMH did not intend to challenge the ownership of Hermes or its business directive, he also made a similar statement in 1999 when he bought a 5 percent stake in the Gucci Group. The luxury giant later increased its holding to 34 percent within a month, leading to a battle for control of the company. However, the French multinational retail company PPR (formerly Pinault-Printemps-Redoute), which was founded by businessman François Pinault, eventually won full control and now runs the Gucci Group, along with retail brands Yves Saint Laurent and Boucheron among others.

Puech, who is chairman of the family management board, said that the decision to block LVMH "is one more demonstration to all those who do not want to believe us. We are a united family, driven by the same spirit of transmitting to our descendants the unique jewel, which we have received from our parents."

In November, BNP Paribas and Bank of America Corp. were hired by Hermes to devise a strategy to protect its business from a takeover by rival LVMH.