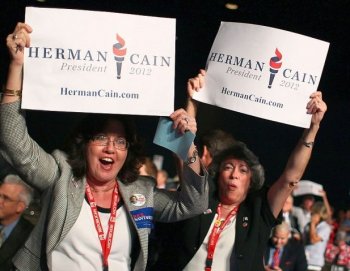 In a rather surprising victory, GOP presidential candidate Herman Cain was announced Saturday as the winner of Florida’s Presidency 5 straw poll, with 37 percent of the vote, garnering more votes than the next two candidates, Texas Gov. Rick Perry and former Massachusetts Gov. Mitt Romney combined.

“Folks, this is what you call momentum. This is a great achievement and it’s because of the work of everybody on this team. Thank you. The Herman Cain train is picking up steam,” said Cain, in an online video addressing his supporters after his victory was announced.

Cain’s victory over Perry and Romney—who are seen as the front-runners in the GOP race—surprised many, as he doesn’t possess the same name recognition or funding as the other two candidates.

A total of 2,657 delegates voted in the Florida Presidency 5 straw poll. While analysts and commentators have traditionally placed a great deal of importance on the winner of Florida’s straw poll—not least because Florida is often a critical state during both primary and general elections—Cain’s victory this time around has primarily been attributed to Perry’s lackluster debate performances, most recently at Thursday’s Fox News- and Google-sponsored debate in Tampa, Fla.

Nevertheless, Cain was upbeat about his straw poll victory, and seemed confident that it was a sign of his campaign gathering momentum.

"The takeaway from Florida, that we took away, is that number one, the citizens movement is more powerful than the establishment wants to give me credit for,” said Cain on “Fox News Sunday,” in reference to the grass-roots Tea Party movement. “So yes, they keep treating me like the Rodney Dangerfield of this primary contest,” said Cain, referring to the late comedian and actor.

Despite winning the Florida straw poll, Cain’s national poll numbers remain low. The most recent Gallup poll of the GOP candidates—which focuses on the preferences of Republicans and Republican-leaning independents—places Cain’s rating at about 5 percent, while Perry and Romney still lead the pack nationally at 31 and 24 percent, respectively.

The cornerstone of Cain’s campaign is his 9-9-9 Tax Plan, which calls for permanently lowering individual and corporate income taxes to a flat rate of 9 percent, eliminating capital gains and estate taxes, and instituting a national sales tax rate of 9 percent.

Cain is notably the 2012 GOP field’s single black presidential candidate, as well as the only one who has not held elected office. Prior to his bid for the White House, Cain—who is from the suburbs of Atlanta—was well known as the former CEO of Godfather’s Pizza, a restaurant chain headquartered in Omaha, Neb.

Throughout his career, he has also served in a few government posts, notably as the deputy chairman and later chairman of the board of directors of the Federal Bank of Kansas City. He was also a civilian employee of the Department of the Navy, working as a mathematician in ballistics.