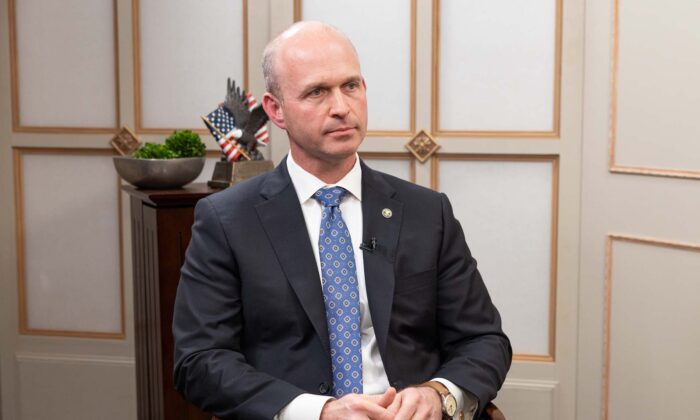 Kevin Roberts, President of The Heritage Foundation, in Washington on June 30, 2022. (Matthew Pearson/CPI Studios)
US

Heritage Foundation Oversight Project Director Mike Howell is demanding copies of all communications between the White House, Department of Justice (DOJ), the FBI, and Donald Trump’s staff about the Aug. 8 FBI raid on the former president’s Mar-a-Lago estate in Palm Beach, Florida.

To that end, Howell—who is a veteran of major congressional oversight projects and a former senior official at the Department of Homeland Security (DHS)—has filed Freedom of Information Act (FOIA) requests with the National Archives and Records Administration (NARA), which is the federal government’s central custodian of official documents, and each of the relevant agencies.

“The Biden Department of Justice has crossed the Rubicon. This raid showed that the administration is unafraid to weaponize the power of the deep state against its political enemies—even a former sitting president,” Howell said in a statement issued shortly after Attorney General Merrick Garland declined to answer any questions about the raid during a brief appearance in the DOJ media conference room on Aug. 11.

“We are filing this request because the American people deserve the answers Joe Biden and Merrick Garland will not give them. There is no reason NARA cannot fulfill our request for these documents, as they should have nothing to do with any ongoing investigation,” he said.

“Ultimately, it looks like the Biden administration raided President Trump’s home over a document dispute—let’s see if they comply with our legal document demand, or if they’re complete hypocrites.

“Rest assured, we will fight to get the truth about this unprecedented act.”

The Heritage Oversight Project requested that federal officials process the FOIAs on an expedited basis, which would allow 10 days before the agencies must either affirm or deny the requests, or face litigation.

The request to NARA was signed by Heritage senior investigative counsel Roman Jankowski, who is also a contributing writer for the conservative nonprofit’s Daily Signal.

“This raid, and what transpired before and after it, has affected American public confidence,” Jankowski said in the request. “As per the Trafalgar Group poll conducted after the Trump raid, 53.9 percent of likely general election voters believe Trump’s political enemies are behind the FBI raid on President Trump’s private home, and only 35.3 percent of likely general election voters believe it is due to an impartial justice system.”

The Mar-a-Lago raid “represents yet another example of the federal government weaponizing law enforcement to punish political enemies, silence critics, and send a message to those whom it views as enemies,” Heritage President Kevin Roberts said in a separate statement. “The Biden administration and the D.C. swamp are making it very clear that they will use all the power of the state to intimidate anyone who stands in their way.”

Roberts added that “the timing is suspect at best, given the upcoming elections and the Senate’s passage of a bill that would authorize the hiring of 87,000 new IRS agents, who will be unleashed to target working and middle-class Americans in order to fund the left’s radical agenda.”

Roberts’s comment may have been a product of the multiple time-consuming and costly IRS audits during the Clinton administration to which the Heritage Foundation and other conservative think tanks were subjected; none ever turned up any wrongdoing.

In a related development, Rep. James Comer (R-Ky.), the top Republican on the House Committee on Oversight and Reform, similarly demanded in an Aug. 10 letter that NARA turn over all communications and documents concerning the raid. Comer was joined on the letter by the panel’s 19 other Republican members.

“Law enforcement raiding a former president’s residence is unprecedented,” the Comer letter told NARA. “Committee Republicans are concerned that NARA would utilize the FBI to gather documents that the president, by the very nature of his constitutional role, could declassify himself, if this was indeed the case as media has reported.

“The Biden administration is continuing to weaponize the FBI against political rivals.”