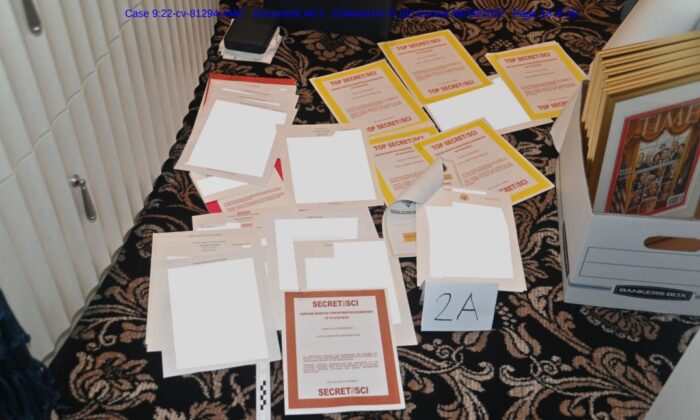 Documents seized during the Aug. 8 raid by the FBI of former President Donald Trump's Mar-a-Lago estate in Palm Beach, Fla, in a photo released on Aug. 30, 2022. (FBI via The Epoch Times)
FBI Raids Trump Resort

Attorneys representing the Heritage Foundation’s Oversight Project are suing the Department of Justice (DOJ) and the National Archives and Records Administration (NARA) for refusing to grant expedited processing of the conservative nonprofit’s request for copies of communications at the center of the FBI’s Aug. 8 raid on former President Donald Trump’s Mar-a-Lago estate.

The Oversight Project’s request for the expedited handling, which is provided under certain circumstances by the FOIA, was based on the intense public interest that exploded as soon as news broke of the raid, which involved more than 30 FBI agents, lasted more than 11 hours, and resulted in the removal of thousands of documents from the estate.

During the raid, which was based on the DOJ’s belief that Trump illegally kept highly secret, classified documents in unsecured facilities at the estate, FBI agents inspected the wardrobe of former First Lady Melania Trump.

Agents also seized an estimated 11,000 non-classified documents and photographs. A total of 103 documents marked with various levels of classification also were seized by the agents. A photograph released by the FBI following the raid reportedly showed multiple folders bearing classification markings that were empty.

The Epoch Times has also reported that the search warrant that enabled the raid specified that agents could also seize information regarding the retrieval, storage, or transmission of national defense information or classified material; any government and/or presidential records created between Jan. 20, 2017, and Jan. 20, 2021; and any evidence “of the knowing alteration, destruction, or concealment of any government and/or Presidential Records, or of any documents with classification markings.”

Mike Howell, Oversight Project director, said in a statement issued late on Sept. 2 that officials within the Biden administration and DOJ have been selectively leaking documents to favored media outlets that have provided supportive coverage of the raid, its aftermath, and its justification.

“Biden’s DOJ and FBI raided Mar-a-Lago over a document dispute. Now, they have a document dispute with us,” he said in the statement. “Let’s see if the law is truly applied evenly, or if these agencies continue to stonewall our efforts while selectively leaking information to liberal media outlets to advance the narrative [Attorney General] Merrick Garland and [President] Joe Biden want.”

Howell is a veteran of major congressional oversight projects, having served as an attorney for the Senate Committee on Homeland Security and Governmental Affairs and the House Committee on Oversight and Reform. He’s also a former senior official at the Department of Homeland Security (DHS), where he dealt with congressional oversight requests during the Trump administration.

“The DOJ is conducting this investigation in an overtly partisan and corrupt manner. The authorized leaks and selective disclosures discredit their entire basis for withholding other information from valid requests such as ours. There is simply no valid ongoing investigation exemption for the communications we are seeking. The American people have a right to these communications, and the administration must turn them over,” Howell continued in the statement.

“Failure to obtain and turn over these materials is an unacceptable double standard and another reason Americans across the political spectrum are losing trust in the Department of Justice,” Howell said.

“It is unfortunate that private citizens must take their government to court to obtain documents that belong to the people. This is more evidence of a two-tier justice system, where The Washington Post and other liberal media outlets are afforded more rights than ordinary Americans outside the Beltway.”