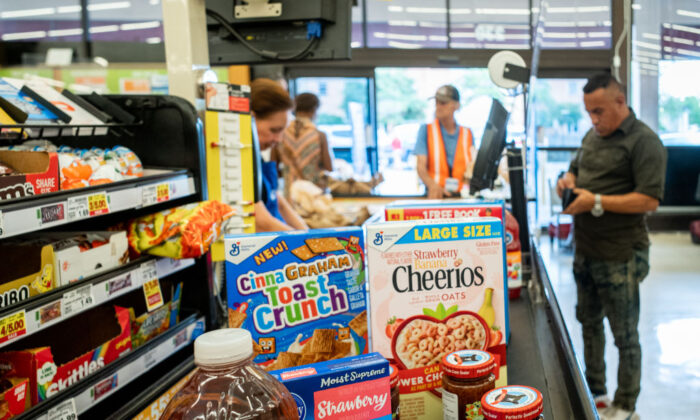 A cashier processes a customer's order in a Kroger grocery store in Houston, Texas, on July 15, 2002. (Brandon Bell/Getty Images)
Inflation

Last month, the annual inflation rate slowed to 8.3 percent, down from 8.5 percent in July. The market had anticipated a rate of 8.1 percent.

Recent data from the Bureau of Labor Statistics (BLS) revealed that while Americans are seeing price reductions at the gas pump, they aren’t seeing the same relief in other areas such as grocery stores. Almost everything outside of the energy index is up across the board.

Meanwhile, the core inflation rate, which excludes volatile energy and food indexes, increased to 6.3 percent in August, up from 5.9 percent in the previous month, and was the highest level since March.

According to economists, the hotter-than-expected increase in core inflation almost certainly guarantees that the Federal Reserve will raise the federal funds rate by at least 75 basis points next week at its policy meeting, and therefore, raises the possibility that large rate hikes will need to continue through the end of the year.

Inflationary pressures continue to weigh on U.S. households. Here’s what changed in the latest inflation report:

The food index surged to an annualized rate of 11.4 percent in August. Grocery store prices advanced to 13.5 percent year over year, while food-away-from-home climbed to 8 percent. On a month-over-month basis, the food index still rose by 0.8 percent. Overall, the food index experienced its biggest annual increase since 1979.

Most food items were up, the August inflation report showed. The causes for these price hikes vary, from weather conditions in key growing areas to strengthening demand amid shifting consumer trends.

Chicken and egg prices, for example, have spiked 16.6 percent and 39.8 percent year over year, respectively. Avian flu outbreaks have been one of the leading contributing factors, as the disease has reduced supplies while consumption has increased. Industry observers say that more consumers have transitioned from high-priced beef to chicken for their protein intake.

Moreover, some of the top poultry processors have raised prices due to rising feed costs and a challenging global supply chain environment. Companies also note that COVID-related disruptions, labor shortages, the military conflict in Eastern Europe, and leading producers curbing their poultry exports have added to price pressures.

The war in Ukraine and significant floods and droughts in the U.S. Great Plains have hurt crops and food supply, sending higher prices for bread (16.2 percent), rice (13 percent), and pasta (15.7 percent). The fruits and vegetable subindex also soared 9.4 percent, with oranges up 14.4 percent, potatoes up 15.2 percent, and lettuce up 10.7 percent year over year. Meanwhile, other food items that rose the most include flour (23.3 percent), milk (17 percent), and butter and margarine (29.3 percent).

Coffee prices have soared close to 18 percent year over year, with roasted and instant climbing 18.7 percent and 13 percent, respectively.

Commodity experts forecast that coffee prices will remain elevated over the next six months amid sliding production and falling inventories. According to Fitch Solutions, stocks in the Intercontinental Exchange warehouses have tumbled to their lowest levels this century as demand continues to outweigh supply.

Brazil, the world’s top bean exporter, has endured volatile weather conditions this year. From droughts to frost, the 2022 harvest could come in smaller than anticipated, adding pressure to the international coffee market.

The shelter index surged to 6.2 percent year over year and rose 0.6 percent from July to August. But it was the rental inflation that gathered the most attention, as rents climbed at an annualized pace of 6.3 percent, the highest 12-month span since 1986. Monthly rents also jumped 0.7 percent, the biggest month-over-month increase in more than 30 years.

Analysts and policymakers closely monitor shelter costs because they account for about one-third of the Consumer Price Index (CPI). The Fed also watches the rental trend as a measurement of so-called underlying inflation.

U.S. rental demand has been climbing. Within this trend are other factors adding to higher rent prices, including the number of new households outpacing the inventory of available housing—months of supply stand at 10.9—and rental vacancies testing all-time lows.

Laura Rosner-Warburton, a senior U.S. economist at the research firm MacroPolicy Perspectives in New York, told Bloomberg that rental inflation will remain elevated in 2023, but it won’t maintain its acceleration.

Sky-high energy prices are finally beginning to ease, with the index growth slowing to 23.8 percent. On a month-over-month basis, the index fell for the second consecutive month, clocking in at negative 5 percent.

From July to August, fuel oil tumbled 5.9 percent, and gasoline prices declined 10.6 percent. They are still up 68.8 percent and 25.6 percent, respectively, from the same time a year ago.

But the notable aspect of the CPI was the rise in energy services (2.1 percent), which included a 1.5 percent jump in monthly electricity prices.

The cause of the slide in motor fuel was the significant decline in crude oil prices. West Texas Intermediate (WTI) and Brent erased their post-invasion gains.

Demand has been one of the crucial factors in the downward trend in energy prices.

U.S. gasoline consumption levels have hovered around the summer 2020 levels as motorists altered their driving habits in response to surging prices, according to the Energy Information Administration (EIA).

China, the world’s largest buyer of crude, has seen its imports drop amid lockdowns throughout pockets of the country. This is part of the nation’s zero-COVID strategy that many market experts aver will weigh on economic growth in the coming months.

Prices have plummeted due to concerns the United States and its allies and Iran will reach a new nuclear agreement. If the two sides successfully resuscitate the Joint Comprehensive Plan of Action (JCPOA), Tehran could begin flooding the market with approximately 1.1 million barrels of crude per day.

A lack of hurricane activity, global economic slowdown forecasts, and greater production by the Organization of the Petroleum Exporting Countries (OPEC) and its allies, OPEC+, this year have weighed on worldwide energy markets.

But some energy analysts warn that prices could tick upward again due to tight market conditions.

“People are bracing a lot of demand destruction. If that doesn’t happen, I think you’ll see prices really explode this winter,” Phil Flynn, a strategist and author of The Energy Report, recently told The Epoch Times.

Health Care Costs and Others

Ultimately, the CPI data show that inflation has become entrenched in the U.S. economy, with prices becoming broad-based.

New motor vehicles and tires have surged 10.1 percent and 13.7 percent, respectively. Be it labor or raw materials, prices for supply have increased the price tag for automobiles.

But it wasn’t all bad news for consumers, as there were pockets of deflation in the economy.

Airline fares dropped 4.6 percent on a monthly basis, for example. Television prices decreased 3 percent, men’s suits dropped 2.3 percent, women’s dresses decreased 4.6 percent, and smartphones decreased 0.7 percent in August. A part of the reason for the deflationary trends in the retail landscape was because of retailers trying to eliminate bloated inventories by dumping their stock, mainly by slashing prices.

Markets will now be focusing on the speed of easing inflation rather than discussing peak inflation, experts note.