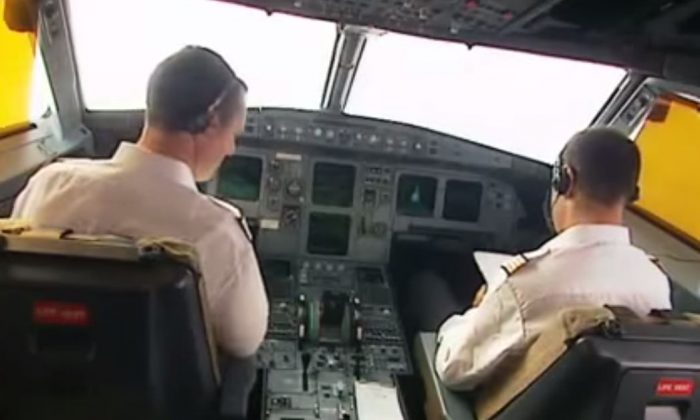 An Airbus video screeshot shows the inside of a cockpit. (YouTube)
Europe

Amid reports the Germanwings plane crash was caused by the co-pilot–who locked himself in the plane’s cockpit before steering the jet into the French Alps–many have wondered about the lock on the cockpit door.

How exactly does cockpit lock work?

Airbus in 2002 introduced a new security measure to prevent unauthorized entry in response to the Sept. 11, 2001 terrorist attacks. “A toggle control in the cockpit enables the crew to control access to the cockpit and secure the door in case of need,” Airbus said. Specifically, the door locks automatically, and anyone who is outside of the cockpit has to get permission from the pilots inside to enter. Airbus released a video on its cockpit door safety features more than 10 years ago:

Evidence recovered from the Germanwings black box show the co-pilot, Andreas Lubitz, deliberately locked the cockpit door to prevent the pilot from getting back inside.

He then initiated a rapid descent before crashing the plane, killing all 150 passengers on board.

Lubitz, 28, received “treatment for depression,” according to a German tabloid, Der Bild. The tabloid claims he got medical care for around 18 months approximately six years ago, said EuroNews.

Officials with Lufthansa said he took a break from commercial pilot training but did not say why.

Meanwhile, Lufthansa says it’s appointing an official to take care of “examining and further refining all flight safety-relevant procedures” at the company following the Germanwings crash.

Werner Maas, the safety pilot at Lufthansa, is taking on the new job of group safety pilot — responsible for overseeing safety procedures across the airline group, which also includes Germanwings and carriers such as Austrian Airlines and Swiss.

Lufthansa says airlines in the Lufthansa Group will introduce the two-person in the cockpit rule “as soon as possible” in consultation with their regulators.

Investigators believe Germanwings co-pilot Andreas Lubitz intentionally slammed a plane into a mountain on Tuesday, killing all 150 people onboard, during a flight from Barcelona to Duesseldorf.