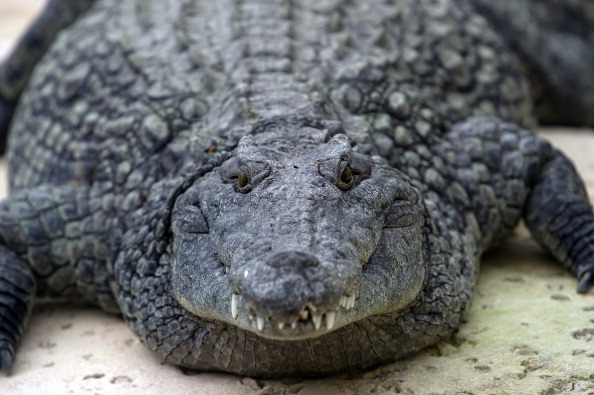 A Nile crocodile is seen on March 26, 2014 at the park "La planete des crocodiles" in Civaux, near the French western city of Poitiers (Guillaume Souvant/AFP/Getty Images)
Asia & Pacific

Here’s Chunky, the Morbidly Obese Crocodile Who Lived to 100

An overweight crocodile that lived to be around 100 years old has died, according to reports. The croc, named Chunky, had lived at the Hazrat Khan Jahan Ali Shrine in Sadar Upazila of Bagerhat district, located in southwestern Bangladesh.

Obesity kills. Even if you are a crocodile https://t.co/0BBCRW2l1D #obesity #nutrition pic.twitter.com/4AsK0BwVkR

Locals apparently believed that feeding the crocodile would grant them good luck.People in recent years threw the crocodile chickens and goats, apparently due to the recent harsh economic climate in the country.

The crocodile keeper, Mohammed Sarwar, told Yahoo! News that three other crocodiles that were kept there died due to overeating. This left a gigantic food supply for Chunky.

Sarwar, 40, was quoted as saying: “We were aware of the problem but were not sure what to do about it. The legend is that anybody who feeds the hunger of the crocodiles will have their hearts desire fulfilled.

“Usually it was just a chicken but more recently people have been offering even more, including goats, believing that big sacrifices meant more chance of a wish being granted.”

According to MailOnline, when staff went to work one day, they found the crocodile floating upside-down and later determined it had died.

Crocodiles tend to live between the ages of 70 and 100. One of the oldest crocodiles ever recorded died at the age of 115.