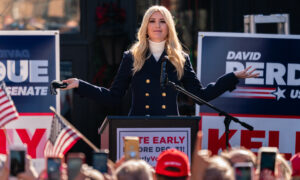 President Donald Trump's name is seen on a stimulus check issued by the IRS to help combat the adverse economic effects of the COVID-19 outbreak, in San Antonio, Texas, on April 23, 2020. (Eric Gay/AP Photo)
Politics

This Is When Americans Can Expect to Receive $600 Stimulus Payments: Top House Republican

The $600 per person, which is half the $1,200 that was directed to most adults in March, should be distributed to bank accounts next week, said Treasury Secretary Steven Mnuchin in a televised interview on Monday. In March, when the CARES Act was passed, it took just over two weeks for the Internal Revenue Service (IRS) to distribute the initial payments to people.

Rep. Kevin Brady (R-Texas), the ranking member on the House Ways and Means Committee, wrote that the IRS expects to deposit the first direct payments before Dec. 31, 2020.

He stated: “IRS expects to send direct deposits before Dec. 31, paper checks/debit card $$ between now & Jan 15 at 10 million per week, all payments by 1-15, if no payment/wrong amount, claim it on 2020 tax return, file early/electronically.”

According to the language of the stimulus and omnibus bill, married couples who file jointly stand to receive $1,200, while certain eligible children will receive $600—which is $100 more than the $500 doled out to them in March’s bill. Adult dependents will not be included.

When to expect 2nd “stimulus check”?

Full payments will be sent to individuals who make up to $75,000 in adjusted gross income, heads of households who make $112,500, and married couples who make $150,000 or under. The $600 payments are gradually reduced for people who make more money than the aforementioned thresholds.

People can use this calculator to see how much money they can expect.

Those who used the IRS non-filer tool earlier this year because they do not typically file tax returns will get the $600 payment.

“People are going to see this money [at] the beginning of next week,” Mnuchin said during an interview with CNBC Monday. “Much needed relief—and just in time for the holidays.”

The $600 will also be protected from garnishments from banks or debt collectors, according to the 5,500-page bill (pdf).