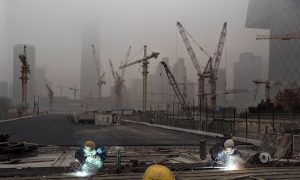 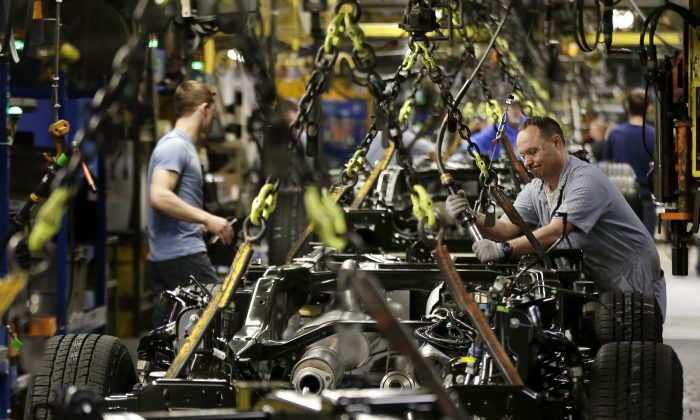 A worker prepares a chassis to receive an engine on a 2015 aluminum-alloy body Ford F-150 truck at the company's Kansas City Assembly Plant in Claycomo, Mo., on March 13. (AP Photo/Charlie Riedel)
Business

It could have been worse. The first estimate for GDP growth during the first quarter of 2015 came in at 0.2 percent annualized, lower than everybody expected. It would have been lower had it not been for one part of the economy, which saved the day.

Wall Street had expected 1.25 percent growth, already much lower than the 2.2 percent we saw in the fourth quarter.

Virtually all parts of domestic production declined. Personal consumption expenditure (to consume, you have to produce, so it’s a positive) added only 1.31 percent to GDP compared to 2.98 percent the quarter before. Most of this was spent on services, goods consumption almost ground to a complete halt.

The Life Blood of Our Economy

Net trade was negative at 1.25 percent and so was fixed capital investment at 0.4, the part of GDP, which is supposed to give us positive returns in the next coming years.

So what saved the day? A massive buildup in private sector inventories, which added 0.74 percent to the final GDP growth. Companies kept on stockpiling wares as the consumption of goods only added 0.05 to GDP.

The rest went to inventories, and will eventually have to be sold (a negative for GDP). If we factor out the stockpiling of goods, which essentially doesn’t do any good, GDP would have been negative at 0.5 percent.

Why does the selling of inventories actually subtracts from GDP. The product has already been produced, and if it’s sold, it takes away consumption from products, which may have been produced instead. Also, it can only be counted once as a positive, not twice.

Cycles in inventory buildup are normal, but just over the last three years, the United States has racked up $1.1 trillion in inventories, or 6.2 percent of GDP. If the other parts of the economy don’t pick up the slack, the destocking process could be ugly.