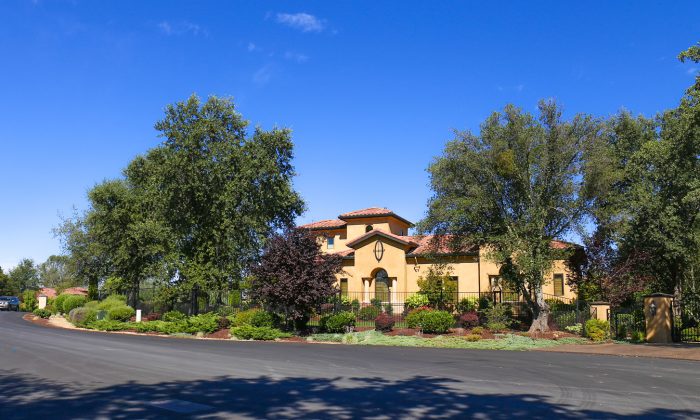 The mansion of Ling Wancheng in the town of Loomis, Sacramento, Calif., on Aug. 4, 2015. (Ma Youzhi/Epoch Times)
China

LOOMIS, California—Nestled in the farmost corner of a small luxury estate in the town of Loomis in Sacramento, California, is the house of Ling Wencheng—wealthy businessman, golf enthusiast, brother of recently purged high-ranking Communist Party official Ling Jihua, and reportedly, a fugitive wanted by the Chinese regime.

Getting there is simple: From Sacramento, drive north along Highway 80 for about 20 minutes to Loomis, then travel along a small rural road flanked by farmhouses, until arriving at a scenic, luxury community with a few dozen estates at the foothills of Sierra Nevada mountains.

One of the most stately of the residences is Ling Wancheng’s canary-colored Spanish-style dwelling. No one looks to be home, but there’s not a fallen leaf in a spacious yard with several well-trimmed trees.

Ling, who made his wealth with a Beijing-based investment company, bought the 7,800-square-foot house from National Basketball Association player Beno Udrih for $2.5 million, according to the New York Times, which cited property records. His neighbors last saw him the previous October, and noted that officers from the Department of Homeland Security tried to contact Ling, 55, several months back, according to the Times.

The Chinese regime wants the United States to extradite Ling, who could provide a trove of information about China’s elite politics given his business and family connections, but the Obama administration is thus far not meeting Beijing’s demands, reports the Times. Ling is believed to be in the United States, writes the Times, citing unnamed American officials familiar with the matter.

The elder Ling, who once occupied a political office similar to that of White House chief of staff under former Chinese leader Hu Jintao, was prosecuted on July 20 after internal investigations by the Politburo revealed that he took bribes, engaged in adultery, and squirrelled away large amounts of documents—more than 2,700 papers—containing state and Party “core secrets,” according to state-run Xinhua New Agency. Ling Jihua was stripped of his Communist Party membership and removed from his job as head of the United Front Work Department, an agency that uses subterfuge, propaganda, and political struggles beyond its borders.

Ling Jihua first fell from grace after he tried to buy off witnesses and cover up reports that his son had been killed in a high-speed crash in Beijing. Two half-naked female passengers were injured in the Ferrari driven by Ling’s son, and one later died.

Last October, Chinese overseas media reported that Ling Wancheng was being investigated. This was followed by reports in March that Ling had carried secret documents to the U.S. Both reports cannot be confirmed.

Xi Jinping’s anti-corruption campaign has been widely considered by commentators of China’s elite politics to be a Party rectification effort aimed at rooting out Xi’s political enemies and strengthen his position.

With research by Jenny Li.