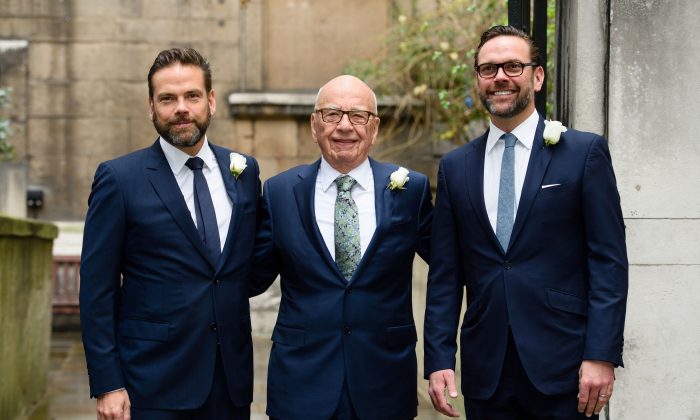 In a move that Brand Republic describes as “highly symbolic” James Murdoch is to return to Sky, the U.K.’s leading subscription broadcaster, as chairman.

This is a remarkable personal rehabilitation. Murdoch the younger will, according to the BBC’s Kamal Ahmed, become one of the most powerful figures in European television—and, as Hazel Sheffield points out, the appointment will encourage speculation that Fox, where James Murdoch currently serves as CEO, may be looking to buy the rest of Sky—of which it presently has a controlling (minority) stake of 39 percent.

It’s been some decade for Rupert’s youngest son who in 2012, in the wake of the phone-hacking scandal, resigned his positions as both executive chairman of News International and BskyB. But, though criticized by communications regulator OFCOM for repeatedly falling short “of the conduct expected of him as a chief executive officer and chairman” in his role at News International he did not go quietly.

A matter of months after resigning as chairman of BskyB he was reappointed as a director of the company with, as the Guardian reported, the support of 95 percent of shareholders. Indeed, if you also factor in James Murdoch’s position with Fox, then this “return” is hardly the surprise that the headline writers may have us believe.

But it does signify, once again, the collective return to prominence and power of certain individuals who were only a year or two ago deemed to be seriously damaged by the Leveson report and the phone-hacking trials. In September 2015, in a move described by Evan Harris, joint executive director of Hacked Off, as the actions of a “dynastic, mafia-type corporation … with no regard for the feelings of the victims of phone hacking,” Rebekah Brooks was appointed chief executive of News U.K. (formerly News International).

And who would have thought, in July 2011 as he sat humbled and “deeply apologetic” before the Commons media and culture committee giving evidence on News International’s role in the phone-hacking scandal, that Rupert Murdoch would once again welcome the hierarchy of the British government into his home? Yet there they all were in December 2015 at his Christmas house party: David Cameron, George Osborne and John Whittingdale, the culture secretary—whose job it is, wrote the Guardian’s Jane Martinson, to “regulate the media industry.”

It seems that this festive revelry was simply a pleasant way to round off a year characterized by a renewed fondness for each other’s company. Thanks to research undertaken by the Media Reform Coalition we know that:

Far more than any other media group, News Corporation executives met with government ministers, officials or advisers on ten separate occasions in the year leading up to the end of March 2015, eight of them attended by Rupert Murdoch himself (and that’s just the gatherings on official diary).

As illustrated by the coalition and other commentators the past two years have seen a remarkable turnaround in fortunes for both News Corporation and Rupert Murdoch. In February 2015, the U.S. Department of Justice resolved not to prosecute News Corp or 21st Century Fox after investigating allegations of phone hacking and bribing public officials abroad. This was followed in the U.K. in December with the decision by the Crown Prosecution Service not to bring corporate charges against News Corporation over hacking due to insufficient evidence.

In what has been a tumultuous few years for the profession of journalism—with hundreds of journalists questioned, arrested and charged as a result of the phone hacking scandal and related journalistic wrongdoing—we are now in a situation, as described by Liz Gerard, where “the Murdoch empire—revamped in the wake of the scandal—is worth twice as much as it was in 2011.”

Indeed, the seemingly preternatural Economist stated in late 2014, that far from seeing the destruction of the Murdoch empire since the accumulated scandals:

Mr. Murdoch and his family have more than doubled their wealth since the scandal broke. Mr. Murdoch, who is 83, remains firmly in charge, and his sons, Lachlan and James, seem better placed than ever to succeed him one day.

All this being the case, and as the appearance of Cameron himself at the Murdoch Christmas shindig would seem to indicate, the second part of the Leveson inquiry will probably not take place while the Conservative government is in office.

The second part of Leveson was meant to consider the extent of unlawful or improper conduct within News International and other media organizations. The plan was to also “examine the way in which any relevant police force investigated allegations relating to News International and whether the police received corrupt payments or were otherwise complicit in misconduct.”

With James Murdoch at the helm of both Fox and Sky, the prospect of a full takeover of Sky by Fox is much more likely than Leveson Part II. As Paul Connew, media analyst and a former deputy editor of the News of the World has written, this is the stated ambition of Murdoch junior and—if it does happen—then Europe’s biggest TV group will be added to a global media group strengthening, rather than withering, while the controversies of the last few years fade conveniently into the memory hole.

John Jewell, Director of Undergraduate Studies, School of Journalism, Media and Cultural Studies, Cardiff University in the U.K. This article was originally published on The Conversation.