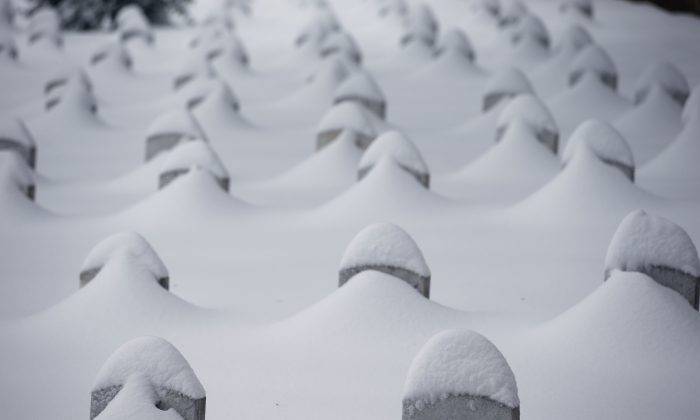 Headstones are nearly covered by snow at Arlington National Cemetery, Saturday, Jan. 23, 2016 in Arlington, Va. A blizzard with hurricane-force winds brought much of the East Coast to a standstill Saturday, dumping as much as 3 feet of snow, stranding tens of thousands of travelers and shutting down the nation's capital and its largest city. (AP Photo/Alex Brandon)
US

New records were set as the blizzard pummeled the the East Coast on Saturday, including dropping an astonishing 40 inches of snow in Glengary and Sheperdstown in West Virginia.

The storm became the first on record to dump at least 18 inches of snow on Washington, D.C., Philadelphia, and New York City.

The snowstorm became the largest in history in Baltimore after a measurement of 29.2 inches there. It also set the record for the biggest snowstorm in Allentown, PA (31.9 inches) and Harrisburg, PA (34 inches).

Records were almost broken in D.C. and NYC, but not quite.


The storm dumped 26.8 inches in Central Park, making it the second-biggest in history–just .1 inches behind the record storm in February 2006, according to the National Weather Service.

It also dumped more than 20 inches across multiple parts of D.C.–which was still only good enough for the second-largest storm in city history. Washington Dulles Airport recorded 29.3 inches, while parts of Virginia and Maryland saw similar totals.

At one point, more than 60 million people had been under blizzard, winter storm or freezing rain warnings as the storm’s effects stretched from Georgia to Massachusetts, according to USA Today.

In Delaware, it was water, not snow, that nearly set a new record. Lewes saw the second-highest high tide in recorded history at 9.15 feet, just a fraction under the 9.22 feet record.