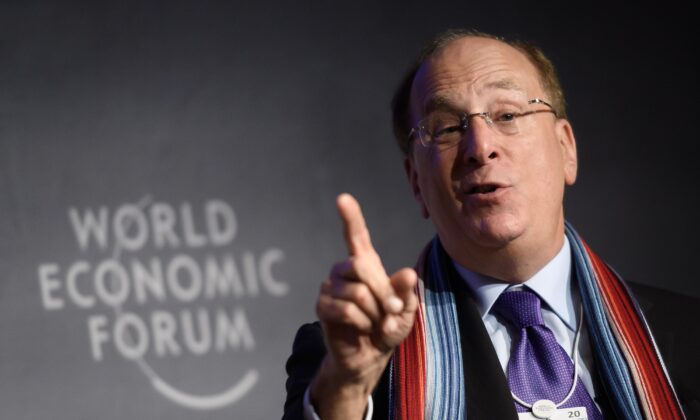 Those institutions are BlackRock, Goldman Sachs, JPMorgan Chase, Morgan Stanley, U.S. Bancorp, and Wells Fargo. The treasurer’s office provided the names on June 13 in response to a Freedom of Information Act request by The Epoch Times.

West Virginia’s S. 262, which passed in March, comes on the heels of a Texas 2021 law restricting the state from investing in funds that boycott energy companies because of any ties to fossil fuels. It authorizes the state treasurer to prepare a list of restricted financial institutions believed to be boycotting energy companies.

In recent years, it has attracted attention for its role in promoting environmental, social, and governance (ESG) principles through its influence in the U.S. private sector.

“You have to force behaviors, and at BlackRock, we are forcing behaviors,” BlackRock CEO Larry Fink said during a 2017 New York Times panel discussion with Kenneth Chenault, then-CEO of American Express.

Fink was responding to a question about BlackRock’s internal mandates on diversity.

More recently, in a 2020 letter to CEOs, he wrote that “we will be increasingly disposed to vote against management and board directors when companies are not making sufficient progress on sustainability-related disclosures and the business practices and plans underlying them.”

Fink also claimed that “companies, investors, and governments must prepare for a significant reallocation of capital” because of climate risk.

The June 10 letters from the treasurer’s office marked the start of a 45-day period before the list will be officially published.

The financial institutions and banks have 30 days from receipt of the letters to show they aren’t boycotting energy companies. Otherwise, they’ll go on the list.

West Virginia’s law lets the treasurer remove boycotters from competitive bidding in the state, as well as similar mechanisms the state uses to do business with financial institutions. It also allows the treasurer to require that institutions with which it transacts forego any energy sector boycotts during the course of any contract with the state.

“We felt like we had a clear conflict of interest,” West Virginia Treasurer Riley Moore said during a June 8 press conference, explaining why S. 262 was put forward. “We produce coal, gas, and oil, and this ESG movement in its current form is really an existential threat to our jobs, our economy, and our tax revenue. I had to do something to start to push against this.”

Others have argued that additional support for the industry runs contrary to an effort to transition from fossil fuels to solar, wind, and other alternative energy sources.

“You have this new revisionism suggesting that we have to be pumping oil like crazy, and we have to be moving into long-term [fossil fuel] infrastructure building, which would be absolutely disastrous,” U.S. Climate Envoy John Kerry said on June 7 at the Time 100 Gala, as reported by Yahoo News.

The Epoch Times has also reached out to the other financial institutions named in the letters, but didn’t receive a response by press time.