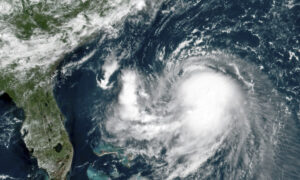 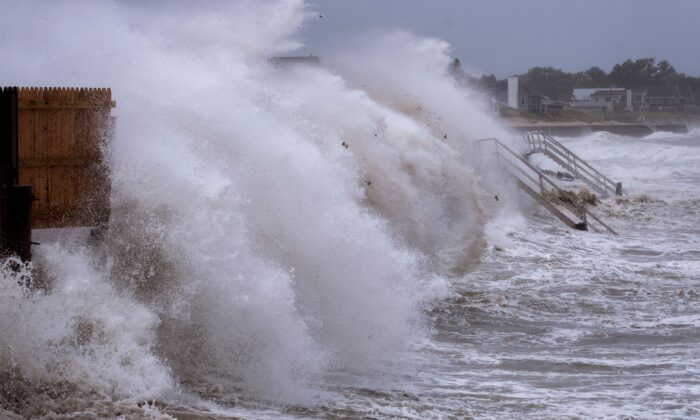 Rains from the storm, which spared coastal areas of New York and New England major damage when its center made landfall Sunday in Rhode Island as a tropical storm, deluged areas from New Hampshire to New York City and down to New Jersey and Pennsylvania.

Downpours, flooding, and even tornadoes were possible Monday in New England, where officials fretted that just a few more inches would be a back-breaker following a summer of record rainfall.

With rain still falling off and on, but with the sun finally peeking through at times, residents in parts of the Northeast turned to cleaning up any damage so far.

The smell of sewage filled the air in Rossmoor, a senior community in New Jersey, as people returned to their soaked homes and possessions.

Roseann and John Kiernan faced throwing out their appliances, ripping up walls and carpets, and replacing their ruined car. Their house filled with nearly 2 feet of water on Sunday, leaving them without power.

Dolores Hebert recalled being ferried to safety by boat with her dog and cat as 8 inches of rain fell and water surged through the streets.

“I was sleeping and when I woke up, it was up to my knees,” said Hebert, 76, as she stood by a front door bearing 18-inch-high watermarks.

Gov. Phil Murphy visited the community, which remains under a flood warning until midnight, on Monday morning. He also planned to visit Helmetta, where about 200 residents fled their homes, and Jamesburg, where Henri flooded downtown streets.

In Manchester, Connecticut, a Hartford suburb some 40 miles from the coast, Annette Landry hoped Monday’s rains wouldn’t repeat the flooding that left three units in her condominium complex under a few inches of water Sunday.

Firefighters said they helped evacuate 18 homes and performed several rescues after Henri dumped about 5 inches of rain in town, the highest total in the state.

“It was a tragedy that this happened, because the people who live here are people who can ill afford to live anywhere else,” said Landry, a 72-year-old retiree whose second-floor home was spared from the flooding from the overflowing Hop Brook. “It has never been this bad. I’ve lived here 40 years.”

Parts of New York’s Hudson Valley, north of New York City, had gotten 4 inches of rain by Monday morning and had no power and flooded roads. An additional couple of inches of rain was possible, and flood watches remained in effect.

Hundreds of customers had no power in Maine, but outages were minimal in Vermont and New Hampshire by Monday morning.

The National Hurricane Center said Henri’s remnants were expected to stall near the Connecticut-New York state line, creep eastward through New England and eventually push out to the Atlantic Ocean. Rainfall from 1 to 3 inches was forecast over much of the area.

The system, now a tropical depression, was moving east at just 1 mph.

By David Porter and Ted Shaffrey