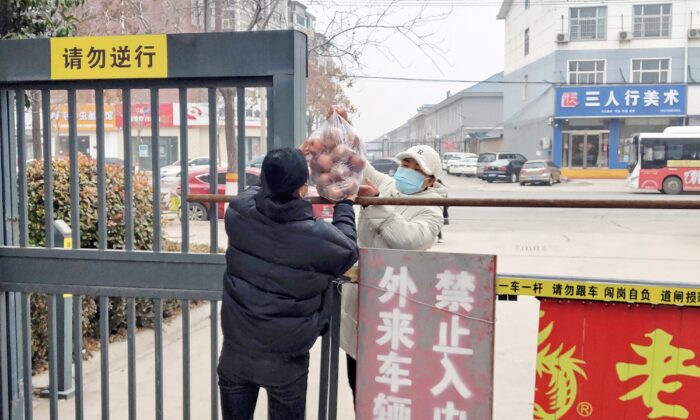 A resident receives food at the entrance of a residental area closed off and restricted due to an outbreak of the Covid-19 coronavirus in Anyang in China's central Henan province on January 12, 2022. - China OUT (Photo by AFP) / China OUT (Photo by STR/AFP via Getty Images)
INSIDE CHINA

'The mentality and logic behind the language is blunt totalitarianism,' says lawyer
By Luo Ya

Luo Ya
Luo Ya is a freelance contributor to The Epoch Times.
View profile
Follow
and Gu Xiaohua

A recent video from an official in China’s Henan Province has sparked outrage from Chinese netizens while a Chinese lawyer has condemned the lawlessness and heartlessness from communist party officials.

On Jan. 20, County Mayor Dong Hong announced his pandemic containment policy online for those planning to return home for the Chinese New Year holiday. He said they will be subject to “isolation and then detention.”

He said, “Anyone who tries to return from a medium or high-risk area will first be quarantined and then detained, regardless of having proof of vaccination or a negative nucleic acid test in [the last] 48 hours.”

A Chinese lawyer surnamed Chou (pseudonym) in Henan told the Chinese edition of The Epoch Times that in facing the pandemic, the official could have been more sympathetic toward people anticipating the annual family reunion, a tradition in China since ancient times.

One Chinese netizen responded, “Previously, if you feel homesick, you just get a train ticket which takes you home. But now if you go back to your hometown out of nostalgia, you face first isolation and then detention.”

Another netizen posted, “Hard to get things done at the civil service, hard to get medical care, hard to register at a school … even hard to go home for the holidays. The farthest distance in the world is a home you can’t return to.”

Chou told the Chinese edition of The Epoch Times that this video has viral in the Chinese community both inside and outside China because “it’s simply outrageous and anti-human.”

He said, “This lawless administration has no boundary,” as exemplified by its one-child policy in the 90s that was publicized by the regime with its slogan; “A river of blood is worth more than one extra birth.”

To party officials, “the leader’s order surpasses any law; they have no respect for law or sense of law,” he said.

Chou used an example of one online banner to fight the pandemic that read, “Break your legs if you go out, knock out your teeth if you talk back.”

He said, “The mentality and logic behind the language is blunt totalitarianism that speaks no law, no humanity, or the slightest civilization.”

Chou added that from the central to provincial governments, city and district, the party’s rules to fight the pandemic are becoming even stricter. Chou said the local official is abusing his power because “detention is a punishment for criminals” and no one has the right to detain anyone who hasn’t broken any law.

Mayor Dong responded to the online criticism saying that the video did not show the whole story. He claimed his remarks such as “those who refuse to cooperate” and “returning home with ill-intentions” had been deleted from the video, according to Chinese media.

After his explanation, many asked what is “returning home with ill-intention?”

Chinese netizens shared a document on the policy for returnees’ health management during the Chinese New Year. It said that the department demands those who return home with an itinerary card with an asterisk “be quarantined at their own expense for 14 days.”

The itinerary card is a mobile app that shows the travels of an individual as tracked by China telecommunication’s big data system.

An asterisk in the upper right corner on the mobile phone screen was previously used to indicate that an individual had visited a city with medium-risk or high-risk areas. It did not mean that the user has actually visited those areas, according to Chinese media.

China’s COVID-19 QR code system—that is green, yellow, or red—indicates a user’s health status. A green code allows the holder to move about unrestricted; a yellow code requires the user to stay home for seven days; a red means a two-week quarantine.

The mayor’s document now also mandates returnees from medium and high-risk areas to follow a “seven-day centralized quarantine + seven-day isolation and observation at home + seven-day health monitoring at home,” with a total of seven PCR tests during the 21 day monitoring period.