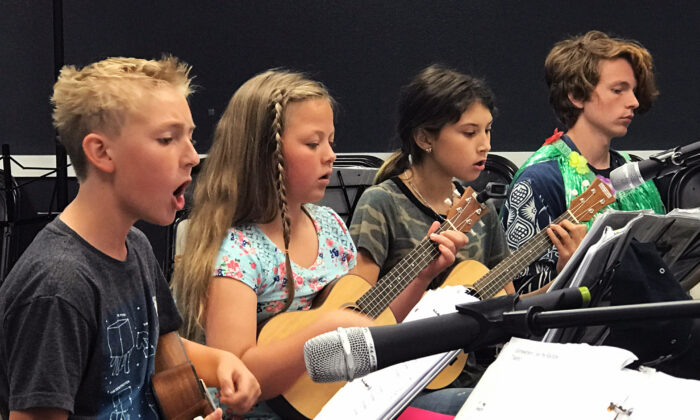 Intermediate students play at the Parents Progress Recital at Musical Mentors in San Clemente, Calif., in 2019. Maki (R) is the volunteer mentor for this group, having gone through the entire program himself. (Courtesy of Duff Rowden)
US Features

In Southern California, music pastor Duff Rowden was riding on a bike trail when he came upon an orange orchard loaded with fruit.

“They were beautiful, large, ripe, and ready to eat,” Rowden said. “I thought I might take a couple, but they weren’t mine, so I rode away.”

Two weeks later, he came by the orchard again.

“The fruit was on the ground, split open, flies buzzing around, ruined, and inedible. I thought, ‘So many kids are like that fruit: ripe, ready, and full of potential,’” Rowden said. “But through bad choices or being overlooked, they end up broken and ruined. Somebody has to step up.

“I asked myself ‘What do I have that kids want?’ Well, I’m a musician and play guitar. Lots of kids want to learn how to play. I can do that.”

He made it his mission to reach kids through music, starting nonprofit MusicalMentors.org in 2007 in San Juan Capistrano, California. He estimated that more than 1,000 kids have been helped by the organization thus far.

“We bring troubled kids living in rough circumstances out of themselves,” Rowden said. “It’s more than learning how to play music. It’s about character development.

“The skills acquired here are transferable to almost every facet of life. Playing music takes discipline, perseverance, commitment, and getting along with others.”

He won’t let them quit.

“We teach kids not to give up, and understand they can do something hard. After overcoming that huge mental obstacle, the sky is the limit,” he said.

“They didn’t think they had it in them. Now they do. That’s a beautiful thing. We call it ‘Learning how to play life right.’”

Rowden and his wife, Bonita, teach 16-week, beginning, intermediate, and advanced classes for youngsters aged 8 to 18. But the key to success is their young volunteers—assistant mentors—working alongside them.

“A 16-year-old volunteer mentor has more influence on kids than I do,” he said. “I’m grandpa age. Youngsters expect me to listen to them. But when someone 16 shows genuine attention, that younger kid knows it’s unusual.

“They think, ‘He doesn’t have to pay attention to me, but he is,’ and it becomes special, a real self-image booster. Volunteers make what we do shine.”

There’s a benefit for volunteer mentors as well, Rowden said.

“Most of them have no leadership experience, and mentoring changes their lives,” he said. “When younger kids look up to them, assistant mentors realize, ‘I am a big deal to somebody.’”

One of the program’s success stories is “Zach,” who came to Musical Mentors doubting himself.

“Zach liked to quit. If it was hard, he wouldn’t do it. The mentors had him learn one bar of music at a time, showing him how, until he learned a whole song. We call that process ‘Go slow and learn fast,’” Rowden said.

“You know, babies fall all the time when they’re learning to walk, but they don’t quit. Babies don’t know how to quit. Quitting is learned.

“I tell kids like Zach, ‘Can you do what a baby can do?’ They say, ‘Sure we can,’ and they acquire a new perspective.”

Zach learned that he could do something difficult and reap the rewards for doing so. He went through all the levels at Musical Mentors and graduated with honors.

“His confidence soared,” Rowden said. “He tried more difficult things in life and did it. He tackled videography and became proficient.”

Zach eventually became a ranger for the California Park Service and was assigned to Doheny Beach State Park. He was also chosen to make training videos for the park’s ranger school.

Bonita Rowden said: “Many kids never learn to conquer something difficult. They need to find encouragement to overcome. Music is a special something they can get into and be part of something good. They’re developing skills not everyone has, so learning makes them special and opens doors. It gets them ready for life.”