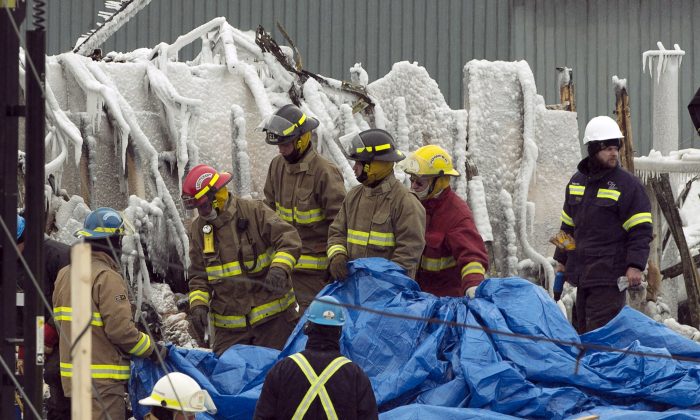 Emergency workers search for victims on Jan. 25, 2014, in L'Isle-Verte, Que., at the scene of a fire at a seniors’ residence that killed 32 and injured 15. The seniors’ advocacy group CARP is calling on Ottawa and the provinces to enact legislation to prevent such fires. (The Canadian Press/Ryan Remiorz)
Canada

The seniors’ advocacy group CARP is calling on Ottawa and the provinces to enact legislation to require the use of fire sprinkler systems in all care homes and implement other measures to prevent fires at facilities.

The call comes in the lead-up to the anniversary of the L’Isle Verte nursing home fire last January that killed 32 and injured 15.

In an open letter, the group urged federal, provincial, and territorial ministers responsible for nursing home safety to take steps to prevent future fire tragedies by legislating the retrofitting of fire sprinklers in all care homes and to enforce compliance with the national building and fire codes.

“The big issue is cost. This is not a piece of rocket science we are talking about here,” said CARP’ s vice president Susan Eng in an interview. “If you had a loved one in the nursing home that is what you would want [governments] to do.”

One of the key findings during the L’Isle Verte investigation was that the building lacked both sprinklers and fire separation walls. Other problems include not having an evacuation plan in place and the lack of procedures that would have sped up the response time of fire crews and the evacuation of residents.

Fire sprinklers make a tremendous difference in the amount of damage and loss of life that can be caused by fire.
— CARP letter

CARP is calling for legislation to retrofit fire sprinklers in all nursing homes that were built before 1997 and therefore are not covered by existing national codes. It also wants to have evacuation plans in place for long-term care facilities and repercussions for not enforcing regulations.

“Since 1969, over 140 residents of care homes in Canada have died due to fire and many more have been injured and displaced. The common recommendation in the coroner’s inquests that followed many such tragedies has been to ensure sprinkler retrofitting at the centre of a fire safety plan,” the letter reads.

“Fire sprinklers make a tremendous difference in the amount of damage and loss of life that can be caused by fire.”

However, according to CARP this is an inadequate timeframe and Ontario and Newfoundland remain the only provinces with sprinkler requirements. Newfoundland’s legislation enacted in 2003 carries a stipulation that if sprinkler systems are not installed, facilities are required to close.

In other provinces discussions are underway to possibly enact similar sprinkler requirements, which Eng explains is the only way of ensuring nursing homes will undertake the changes. The plans for evacuation are equally important and should also be a component of the changes, she stresses.

“If nursing home operators won’t do it then the government has to make them. In Ontario, they put aside $10 million for it,” said Eng. “All of this public disapproval going into the inquests has not done the trick. You would have thought people would have felt sufficiently embarrassed and wanted to avoid that embarrassment.”

Statistics Canada figures estimated in 2011 that of the nearly 5 million seniors in Canada, 352,205 aged 65 and over lived in housing such as nursing homes.