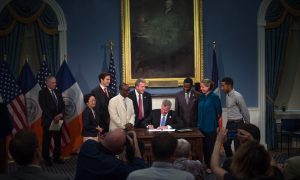 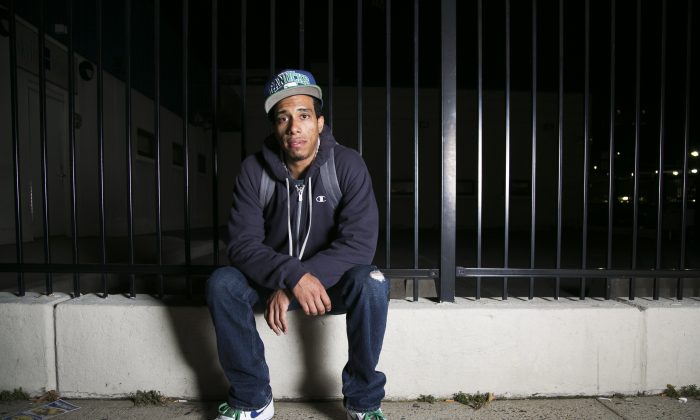 In some cities, alternatives to prison are working better for the mentally ill and drug addicted
By Annie Wu
biggersmaller
Print

NEW YORK—Anthony Cruz is a different man now that he has been locked up several times.

Before serving his 10-year sentence in New York state prisons for manslaughter in the first degree he was diagnosed with adjustment disorder and depression, among other mental health conditions. Cruz spent a total of three years in solitary confinement, but he said he was denied help from mental health staff in prison. Unless he had suicidal thoughts, he wasn’t allowed to talk to a psychiatrist.

Since Cruz was released on parole two years ago, it’s been difficult finding a steady job with a felony conviction on his record. This summer, he received notice from the city that his family would have to relocate from their current homeless shelter location in the Bronx. Then, his wife’s temporary teaching job ended, and her weeks of job searching didn’t yield results. To cope with the stress, Cruz turned to MDMA, a drug he was addicted to before. “I was going through so much,” Cruz explained.

At a regular visit to the parole office for a drug urine test, Cruz was caught with the drug in his system.

He had a panic attack upon hearing that he’d have to go to jail at Rikers Island for his parole violation. “I was wailing and crying, telling the parole officers that I didn’t want to go back to a cell.”

Cruz suffered several more panic attacks while inside. He couldn’t sleep being around so many people. He was reliving his deepest fear.

Local jail reform advocate Five Mualimm-ak, with the Incarcerated Nation Corporation, sought to get Cruz treatment for his drug dependence and other mental health needs, but nothing came of the requests.

Across the country, people with mental illness and substance abuse are repeatedly cycled in and out of the criminal justice system. The latest statistics from the U.S. Department of Justice (DOJ) estimate that more than 1.26 million mentally ill adults are detained in the country’s jails and prisons. Some cities are trying to change this statistic through programs that offer some of these nonviolent offenders a way out of incarceration, and a chance to improve their lives.

Out of Jail, Into Treatment

In the 1980s and ’90s, different communities across the country created programs to provide treatment alternatives to incarceration for people like Cruz, who would otherwise face jail time for nonviolent drug charges, or those who committed offenses during a mental health crisis.

For example, in the late ’80s, the police department in Memphis, Tenn., devised a crisis intervention team (CIT) where officers would be trained in identifying and responding appropriately to the emotionally or mentally disturbed. Police are taught de-escalation techniques to calm down individuals who may be agitated or aggressive. And instead of arresting them, police would bring them to a mental health treatment center.

The Memphis model has been adopted by other cities, including in San Antonio, Texas, where police officers bring people to The Restoration Center. There, they can get medical and mental health treatment, as well as social services such as housing and job training.

San Antonio also has a detox center and a 90-day residential program for those in need of substance abuse treatment. For those in need of more intensive care, they get transferred to state hospitals or private institutions if the individual has private health insurance.

Leon Evans, the director of San Antonio’s mental health care system who developed the center, said he got the idea after he saw the county jail overcrowded with people in need of mental health treatment.

Police would bring the mentally distressed to the emergency room or jail, but without treatment or housing, they get released back to the streets and may turn to drugs and alcohol to deal with their illnesses. “They would get arrested the same day and go right back into jail,” Evans said.

“Texas is a pretty conservative place,” said Evans. “[W]e realized that putting them in jail was the last thing we should be doing.”

Evans said the center has been proven effective: about 70 percent of those who graduate from the center’s treatment programs are living and working independently a year later. Since the center was built five years ago, the county has also saved $10 million per year.

Dangerous for the Mentally Ill

The country’s jails and prisons are toxic environments for those with a mental illness.

In August, a DOJ investigation of jail conditions at the city’s main jail Rikers Island found that adolescent mentally ill inmates were routinely abused by corrections officers and placed into solitary confinement for extended periods of time—as punishment for breaking rules, or getting into verbal disputes with the officers. Several high-profile cases of mentally ill inmates dying under questionable circumstances while detained at Rikers have been reported in the last year.

Incarceration also has heavy financial costs. A recent analysis by the city comptroller’s office revealed that in fiscal year 2014, it cost city taxpayers more than $96,000 a year to house an inmate in jail.

Treatment is more cost-effective than jail, said Jim Parsons, research director at the Vera Institute, a criminal justice policy research organization based in New York. The organization found that alternative-to-incarceration programs in New York City save an average of $7,038 per person.

In the Belltown neighborhood of downtown Seattle, Wash., not long ago, drug use was rampant. Many people with long-term drug addictions were getting arrested and jailed repeatedly for drug possession, but that didn’t stop them from the habit, said prosecuting attorney Dan Satterberg.

The county government decided to try something different.

In collaboration with the American Civil Liberties Union in Washington and funded by private foundations, the county created the Law Enforcement Assisted Diversion (LEAD) program in 2011.

Like the police department in San Antonio, police officers identify people with a low-level drug offense who are in need of treatment. If they agree to get help through the program, no charges will be brought.

“Police officers now have another option, another tool in their toolbox, other than bringing someone to jail,” said Satterberg.

The program operates on a “harm reduction” principle instead of total abstinence, meaning that a person will not get kicked out of the program because he or she relapsed while trying to kick the addiction.

“Most professionals will tell you that recovery from substance abuse is a process. It includes a number of relapses,” said Parsons, the Vera Institute research director. Especially for people with a lifelong addiction, staying completely clean the first time around is difficult.

While the LEAD program’s effectiveness is still under evaluation by researchers at the University of Washington, Satterberg said many have already turned their lives around since entering the program.

In New York City, over a dozen alternative-to-incarceration programs are currently run by nonprofit organizations. Eligibility criteria varies from program to program.

At Fortune Society, for example, staff will screen cases for people who are likely to face a jail sentence and who can benefit from their services, said Fortune Society President JoAnne Page. Aside from offenders with substance abuse or mental illness, Fortune also runs a program for the general population, diverting about 300 people each year.

Unlike in Seattle and San Antonio, offenders in New York City still have to appear in court, with the judge or district attorney having final say over the person’s fate.

Oftentimes, placement into a program is negotiated as part of a plea agreement at court. The courts usually stipulate that the offender stays completely abstinent throughout the program’s duration, otherwise he or she would face prosecution or sentencing.

Because of the strict requirement, some have ended up sentenced to upstate prisons when they relapse.

“Our clients in alternative-to-incarceration programs are often given an impossibly short window of opportunity to get clean,” said Elizabeth Keeney, managing director of social work at the legal services provider, The Bronx Defenders, whose attorneys have represented such clients at court.

Addiction should be understood as a chronic illness that needs lifelong attention, like hypertension or diabetes, Keeney added. “Instead our clients are demonized for what is characterized as personal weakness.”

Page said New York City could benefit from earlier intervention, beginning with the police. “For someone who is mentally ill and disruptive, police don’t have much of an option other than bringing them to jail,” she said. She recommended a community center where people can get treated without being arrested—like San Antonio’s.

In June, Mayor Bill de Blasio announced a task force to reduce the number of inmates with mental illness and substance abuser problems within the city’s jails. Over the summer, the city also rolled out a new program, called Court-based Intervention Resource Team (CIRT), to remove people from Rikers who need mental health or substance abuse treatment, while their cases await trial. It remains to be seen whether judges are willing to place offenders into the program.

In the meantime, Cruz is still struggling to recover post-incarceration. He wants to enroll in culinary school, because cooking keeps him calm.

He hopes to become an advocate for ending the excessive use of solitary confinement in New York jails and prisons. “So I can fight for the brothers who are still suffering inside.”

Why Are We Using Prisons to Treat the Mentally Ill? Watch the video by Brave New Films about the Restoration Center in San Antonio, Texas