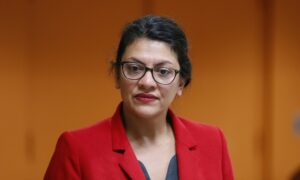 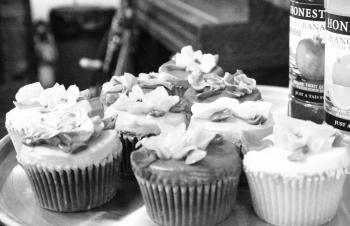 Hell’s Kitchen: Rich in History and Overflowing with Chow

NEW YORK—The most popular legend for the origin of “Hell’s Kitchen,” the west side Manhattan neighborhood, features two police officers, one a veteran and one a rookie, who were on duty on 10th Avenue in 1881.

At that time the region was rampant with violence and police wouldn’t dare step foot inside it alone. The two cops were standing aside watching a riot. “This place is hell,” the rookie commented, to which the veteran cop said “No, this place is hotter. This is hell’s kitchen.”

Intrigued with Hell’s Kitchen’s food, culture and history, I set off on a journey down 9th Avenue through the heart of Hell’s Kitchen, encompassing the area from about 34th St. to 59th St. and from 8th Ave. to the Hudson River, it is home to a wide variety of ethnic food and enjoys a colorful history of immigrants, actors, and musicians.

Liz Young, an ex-chef and founder of Liz Young Tours, which offers culinary walking tours, guided my tour of Hell’s Kitchen. Ms. Young was delighted to have a food, and history novice tag along on a private tour through the west Manhattan community. Armed with only an empty notebook, an anxious palate, and a photographer in tow, I plunged into the depths of Hell’s Kitchen.

Liz brought me to the Cupcake Café on the corner of 9th Ave. and 40th St. to kick off our tour. Upon seeing the cupcakes on display, I was captivated. The extensive array and extravagance of the cupcake decorations was breathtaking. Every cupcake was frosted decadently into the shape of a flower in vibrant red, orange, and green hues. But what struck me more was the simple and “old school” atmosphere of the café, without tiling or wallpaper, the bare-naked concrete floor and brick walls seemed to mimic that of a bar in 1800s Hell Kitchen, only instead of selling alcohol, the café was selling cupcakes.

Before Irish immigrants fleeing the Great Potato Famine moved into what is now known as Hell’s Kitchen in the 1840s-50s, the Dutch inhabited the region that they called “Bloemendael,” or “Vale of Flowers.” The flat green pastures, gracious streams, and meadows with fields upon fields of flowers would not last long, as the Irish and other European immigrants flooded into the region, just as industry was booming. The immigrants worked in the breweries, factories, and slaughterhouses and on the docks and railroads. The 1851 opening of the Hudson River Railroad were responsible for a large portion of the influx of immigrant blue-collar workers.

The combination of competition between different ethnic immigrant groups, their lower-middle-class status, and alcohol meant that Hell’s Kitchen quickly degenerated into a violent, drunken, and grimy neighborhood. The excruciating smell of the slaughterhouses didn’t do much to sweeten the area. Irish pub culture soon became the norm in the neighborhood, adding to New York the now popular Irish pubs that seem to be more prevalent than in Ireland.

Part of that culture is still firmly instilled at Rudy’s Bar and Grill on 44th Street near 9th Ave. Known for its dirt-cheap booze and free hotdogs (and the pig that stands guard outside), Rudy’s clientele, middle-class folks, is exactly what most bars and taverns in the late 1800s and early 1900s catered to. Most restaurants in the area served simple, inexpensive foods such as Rudy’s hotdogs.

But sometimes, it became a big deal. When Puerto Ricans began moving into Hell’s Kitchen in the 1950s, the tension between Italian, Irish, and Puerto Ricans intensified. The result was something like the musical and film West Side Story, though I sincerely doubt they danced around snapping their fingers before settling disagreements.

Nowadays, Irish and other Europeans aren’t the only inhabitants of Hell’s Kitchen. The diverse population is best exemplified by International Foods, next door to Cupcake Café and one of the premier destinations for those shopping for international groceries in town. With huge bags brimming full of bulk goods such as spices and grains, International Foods certainly has an international flavor, with spices from curry to turmeric and a plethora of Eastern European specialties. Since Dino, International Foods’ owner and manager for 40 years, is Greek, he imports his feta cheese and pita bread directly from Greece. I had a bite, or rather, multiple bites, and I hope it doesn’t sound cheesy to say this, but my mouth exploded with joy.

With my mouth full of feta cheese and pita bread, my eye caught a glimpse of the dessert section filled with European specialties, and I was lured over. The baklava, a Turkish pastry, and kataifi and kourabiedies, Greek desserts, were, in my mind, begging me to eat them, but I resisted.

As I started to walk out the door, I tripped, only to look down and see that I had supposedly tripped on air. Turning around, I saw the fattest cat I have ever encountered scamper away, though I couldn’t see its legs because it was so big. I don’t know what Dino has been feeding that cat, but its size must be a testament to how good the food at International Foods is.

You can’t have good food without Italian food. Italians have had a presence in Hell’s Kitchen since the Irish and Germans moved in, but on a smaller scale. Like any other cuisine, Italian food is well represented with many restaurants in the area but probably the most famous Italian food establishment isn’t a restaurant, but rather a butcher shop.

Esposito’s and Sons on 9th Ave. at 38th St. is the local go-to place for meats, ranging from the ordinary steak to Italian sausage and lamb hearts. A fine example of the mom-and-pop shops of Hell’s Kitchen, Esposito’s not only takes individual orders but provides area restaurants with much of the meat they serve. Esposito’s makes over 10,000 of its signature pork sausages for local restaurants, and the odds are good that if you’re dining on sausage in a Hell’s Kitchen restaurant, it’s from Esposito’s.

Two other Italian food places are also known for their beef, but unlike Esposito’s, it’s their beef with each other. Manganaro’s Groceria Italiano and Manganaro’s Hero Boy, are both owned by the same family and are side-by-side on 9th Ave. between 37th and 38th Streets, and they have been feuding since 1961. Two brothers went one way in the family business to form Manganaro’s Groceria Italiano, which specializes in grocery items, and the two other brothers went the other way to form Manganaro’s Hero Boy, which specializes in hero sandwiches. For decades, they have bickered with each other while trying to one-up each other, accusing each other of infringing on each other’s business and constantly giving each other the silent treatment. While people don’t visit both Manganaro’s just for the drama, I’m sure some might find loopholes. I can just imagine a diner insisting to a Manganaro’s manager, “But the other Manganaro’s charged me half for the same meal!”

Today, due to its location by the Theatre District, Hell’s Kitchen is home to many actors, musicians, and artists who work in other parts of Manhattan and come home to Hell’s Kitchen for the night. Hell’s Kitchen has been the home of celebrities such as Robert De Niro, Chevy Chase, and Alicia Keys.

Food has been a part of Hell’s Kitchen for decades. Those that see music or Broadway shows nearby come to eat at Hell’s Kitchen; a portion of West 46th St. is known as “restaurant row” for its many ethnic restaurants. Every May 9th Avenue hosts an international food festival from 37th Street to 47th Street and is one of New York City’s oldest street fairs.

Hell’s Kitchen’s rich history and culinary treasures are second to none. It’s time they rename it Heaven’s Kitchen.

Special thanks goes to Liz Young for her knowledge and insight during the tour. For more information about Liz Young Tours, please visit LizYoungTours.com.