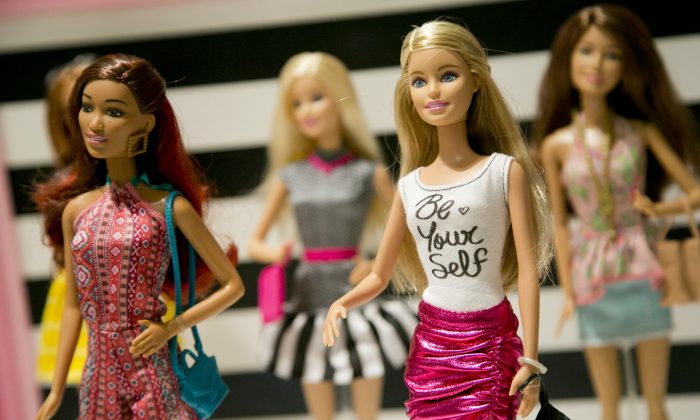 Barbie Fashionista Dolls from Mattel are displayed at the TTPM Holiday Showcase in New York on Sept. 29, 2015. The U.S. toy industry is expected to have its strongest year in over a decade. Richard Dickson, Mattel’s president and chief operating officer, told investors that he’s seeing “a lot of positive momentum” coming from its two biggest brands—Barbie and Fisher-Price. (AP Photo/Mark Lennihan)
Tech

Hello Barbie Doll Is Vulnerable to Hacking, and It Connects to WiFi Networks With the Name ‘Barbie’

The Hello Barbie doll, which is connected to the Internet, has a number of security flaws, experts have warned.

Data released Friday by security firm Bluebox says there are vulnerabilities in the $75 doll. The firm says the doll records speech when someone talks to it, then it sends the recording to the cloud where it is analyzed. A response is determined and sent back to the doll.

However, the process is vulnerable at several points, the analysis concludes. The app could connect to any WiFi network with the word “Barbie” in the name regardless of whether the connection is secure or not, which puts the transmitted data at risk.

We discovered several issues with the Hello Barbie app including:

On the server side, we also discovered:

The POODLE bug, which was discovered 14 months ago, can break HTTPS encryption. As the firm noted, Hello Barbie’s makers didn’t patch the widespread bug.

The testers sent their findings to Mattel and ToyTalk.

According to NBC News, which obtained a statement from both companies, the two are working on the problem.

“We have been working with Bluebox and appreciate their Responsible Disclosure of several issues with respect to Hello Barbie. We have already fixed many of the issues they raised, such as removing the weaker SSLv3 ciphers from our servers,” ToyTalk said in a statement.

Mattel said it’s “working closely” with BlueBox to “ensure the safety and security of Hello Barbie.”