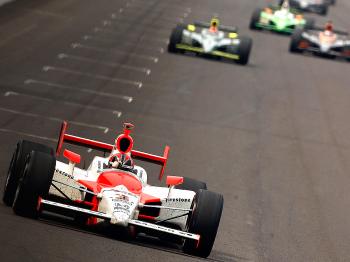 By James Fish
biggersmaller
Print
To the delight of a Crowd of 300,000 who turned out to watch the 93rd running of the “Greatest Spectacle in Racing,” Helio Castroneves entered a very exclusive club: Three-time winners of the Indianapolis 500.

Overcome with emotion, Castroneves burst into tears as he drank the ceremonial bottle of milk, celebrating his amazing comeback to stand on the top of the podium at the Indianapolis motor Speedway.

Helio Castroneves, who five weeks ago was wondering if he was on his way to jail, is instead on his way into the history books. Castroneves, acquitted of tax charges which threatened to end his career, has entered the pantheon of American auto racing, joining such legends Al and Bobby Unser, A.J. Foyt, and Rick Mears, as three-time winners of America’s greatest auto race.

Ryan Briscoe passed Franchitti on lap 53, but only led for three laps when Graham Rahal lost control in turn Four, destroying the right rear and bringing out a yellow flag. Briscoe took the opportunity to pit, but got a bad set of tires, which cost him an extra pit stop and sent him to the back of the pack.

No Grip on the High Line

The outside line claimed many drivers; apparently there was no grip whatsoever on the high line, particularly through turns Three and Four. Mario Moraes, Rahal, Ryan Hunter-Reay, and Robert Doornbos, Nelson Phillipe, and Justin Wilson were among those who hit the wall trying to run high.

On lap 83 Davey Hamilton became a victim of the high line, as he moved over to let the race leaders through, lost grip, and hit the wall hard, bringing out the race’s fourth yellow flag.

On the restart on lap 90, defending Indy winner and series champ Scott Dixon passed his teammate Dario Franchitti to take the lead.

On lap 98, Tony Kanaan hit the wall in a vicious flaming crash. Something broke in his right rear suspension, ramming him into the wall. After bouncing off, his momentum carried him back into the wall for another impact. Kanaan was uninjured, fortunately. “Me and this place … one more time again,” Kanaan said as he left the infirmary. Of eight Indy starts, Kanaan has led seven the race in seven, but he has yet to win the race.

On lap 131, Nelson Phillipe brushed the wall, bringing out another yellow. During the ensuing pit stops, Dario Franchitti nearly drove off with the fuel hose still attached. A few stalls down, Vitor Meira made the same mistake, with more dramatic results: the spilled fuel ignited, engulfing the car and driver in a fireball. Meira’s pit crew extinguished the fire almost immediately; one crew member received minor burns, but no one was seriously injured.

Danica Patrick radioed her crew, “The car is good,” telling them not to change anything for the next stint. Her crew told her to “really save fuel,” as they hoped to finish the race without another stop.

On lap 174, Raphael Matos, who had been driving great rookie race, tried to pass Vitor Meira on the outside, but there wasn’t enough room. The two came together, flipping Meira’s car on its side and sending it sliding along the wall. Both drivers received medical attention. Meira reported severe lower back pain but could move all his extremities.

This caution, the eighth, ensured that all drivers would be able run flat-out to the end. Ryan Briscoe, who had short-filled earlier to gain track position, dropped a few places as he had to come in to top off his tank.

At this point, strategy went out the window and set-up became all–important—the race came down to an 18-lap shootout.

2005 winner Dan Wheldon, driving the National Guard-sponsored Panther Racing car, had the powerful Penske car of Castroneves ahead and Danica Patrick behind. “It’s getting fun out here; I’m ready to go,” she told her crew. “I think I can get Dan.”

Though the Penske cars had been slow on restarts throughout the race, Castroneves made the right adjustments this time, and when the green flag fell, he leaped out to a 1.4 second lead over Wheldon.

Castroneves, with clean air and a clear track ahead was the fastest car on the track, lapping at 219 mph and opening a 1.99 second lead. Realizing he was uncatchable, Helio relaxed just a bit and rolled home 1.34 seconds ahead of Wheldon, who was .35 seconds ahead of Danica Patrick, who scored her best Indy finish in five attempts.