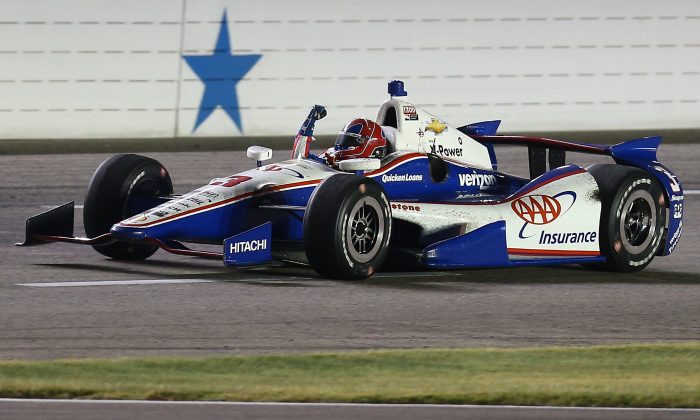 Helio Castroneves Gets Third IndyCar Win at Texas in Firestone 550

Helio Castroneves became the latest IndyCar driver to win a  race in 2013 with his victory at in the Firestone 550 at Texas Motor Speedway Saturday night.  He is the seventh winner in eight races.

It was Castroneves’ third win at Texas Motor Speedway, and it moved him firrmly into first place in what has been one of the most interesting IndyCar championships in years.

The Penske driver (he might safely be called the Number One Penske driver) took the lead on lap 99 of the 228-lap race around TMS’s 24-degree banking and opened a big enough lead that he could pit and come out still in front.

His crew gave him the perfect set-up: he was one of many fast cars when the race started, but as night fell and the track cooled, only Helio had the car with traction. Once he took the lead, the 38-year-old Brazilian veteran never lost it.

Helio’s car was phenomenal. He got more mileage out of his fuel and more laps out of his tires than anyone else on the track, while also being able to run a higher line to pass on the outside when he needed to.

The “Dancing With the Stars” champ was almost five seconds ahead at the finish, but had led by more than 15 seconds at times during the race. No one could come close.

Even more amazing is that his car was not assembled correctly. Its rear diffuser bolts hadn’t been tightened correctly, letting the top of the tunnel sag slightly under the stress of hundreds of miles of racing. This actually cost Castroneves a tiny amount of downforce—he might have gotten an extra couple laps out of each stint otherwise.

Penske was fined for the infraction—rules are rules—but Helio didn’t lose any driver points. The car was out of compliance only 1/40th of an inch, not enough to affect the outcome.

He is also firmly in the lead for his first championship—but not far in the lead. He was tied with Marco Andretti entering the race, and 22 points ahead after his win. Marco’s team mate and defending champion Ryan Hunter-Reay finished second and lies a further five points back in the standings.

Indy 500 winner Tony Kanaan used a different strategy to take third. The KV Racing driver pitted on lap 199 for fresh rubber and charged through the rest of the drivers who were nursing older tires to the end. The tactic didn’t quite pay off; Kanaan couldn’t catch Helio or Hunter-Reay. Third was still a good finish, and kept fourth in the points, 64 behind the leader.