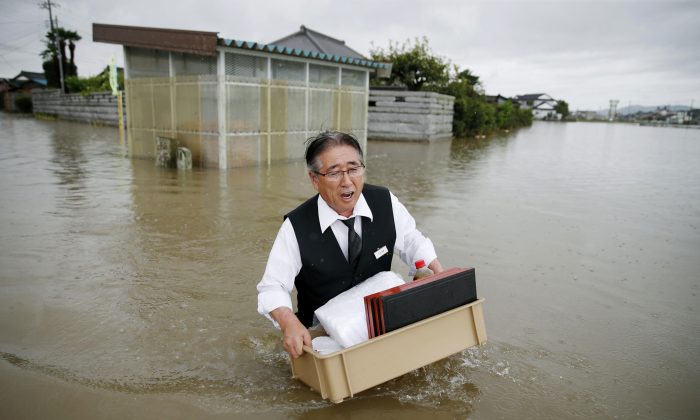 JOSO, Japan—Raging floodwaters broke through a flood berm Thursday and swamped a city north of Tokyo, washing away houses, forcing dozens of people to rooftops to await helicopter rescues and leaving one man clinging for his life to a utility pole.

There were no immediate reports of casualties, but rescue officials said they were overwhelmed by pleas for help.

As heavy rain pummeled Japan for a second straight day, the Kinugawa River broke through a flood berm at 12:50 p.m., sending water gushing into the eastern half of Joso, a city of 60,000 people about 50 kilometers (30 miles) northeast of Tokyo.

Aerial footage showed a wide swath of cityscape underwater, more than one-story deep in some places. The rains came on the heels of Tropical Storm Etau, which caused flooding and landslides elsewhere Wednesday as it crossed central Japan.

In one dramatic scene, the rescuer descended four times from a military helicopter over 20 minutes to lift up four people one by one, as a deluge of water swept around their home.

Nearby a man clung to a utility pole as the waters rose before being taken up by a rescue worker who had to be first lowered into the rushing water so he could make his way over to the man.

Others waved cloths from their decks or roofs to get attention as torrents of water washed away cars and knocked over buildings. Photos from Japan’s Kyodo News service showed people waiting for help on top of cars and a 7-Eleven delivery truck, surrounded by water that nearly submerged the cars.

Kyodo reported that 60 people had been rescued by helicopter, and rescue work was continuing as the sun began to set five hours later.

Akira Motokawa, a city evacuation official, told national broadcaster NHK that rescuers have been unable to keep up with the volume of calls for help.

The Transport Ministry estimated that up to 6,900 households in a 37 square-kilometer (14 square-mile area) could be affected by the flooding, Kyodo said.

Only about 2,500 of the city’s residents had reached shelters by 2 p.m., the news service said.

Tokyo was drenched with rain, but the hardest-hit area was to the north in Ibaraki and Tochigi prefectures. One woman was missing hours after a landslide hit houses at the foot of a steep, wooded incline. Bullet train service was partially suspended.

The Fire and Disaster and Management Agency said 15 people were injured by Etau, two seriously, both elderly women who were knocked over by strong winds.