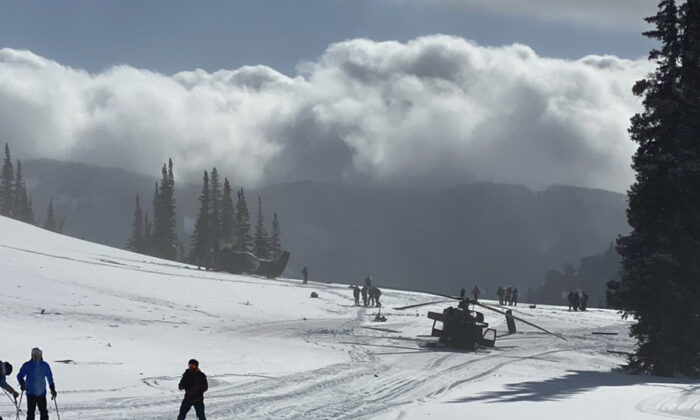 A scene where a pair of Utah National Guard helicopters were involved in an accident near Snowbird Ski Resort in Snowbird, Utah on Feb. 22, 2022. (@LifterMike93 via AP)
Crime and Incidents

SALT LAKE CITY—Two Blackhawk helicopters crashed within a few hundred yards of a Utah ski resort Tuesday morning during a training exercise as skiers on a nearby lift watched a huge cloud of snow billow into the air.

Amazingly, none of men and women aboard the helicopter or the dozens of skiers nearby were injured, authorities said. Utah National Guard spokesman Jared Jones said that the crash occurred during a standard training exercise on U.S. Forest Service land just outside the boundaries of Snowbird Ski Resort, about 28 miles from Salt Lake City.

Joseph Schafer, a 23-year-old from Provo, heard the thud. He said it sounded similar to the blast noise from the explosives ski patrols set off to control avalanches, but realized it was a crash when he saw a helicopter’s rotor fly out of the cloud of powder. He was thankful nobody was seriously hurt, but said skiers like him were sad when the resort closed lifts and trams near the crash site.

Other skiers and snowboarders taking advantage of post-Presidents Day weekend’s fresh snow and clear skies said they also heard the boom and saw dust emanating from the crash site below their chairlift.

When it settled, some could see broken propeller blades in the wreckage of the crash site.

Noah Sikorski, an 18-year-old skier from Cottonwood Heights, said he saw the helicopters go down at a flat area that’s often used for snowmobile lessons. Though the landing at first appeared controlled, he said he was alarmed when he saw debris hurling toward the chairlift he was on. He later saw four crew members in National Guard uniform lugging a stretcher with gear and equipment strapped on.

Jani Radebaugh, another skier from Provo, said she and her husband saw the helicopters flying close to the ground in what looked like a formation. The couple turned around after the helicopters disappeared into the dust their rotors had kicked up, but then were jolted upon hearing a “womp.”

“All I could see is a big, long, straight object flying from there—maybe 100 or 150 yards away from there,” Radebaugh said of the propeller blade.

When the dust settled, she saw a flipped Blackhawk in the snow.

Kaia Shine, an 8-year-old from Steamboat Springs, Colorado, who was skiing with her father and sister also saw broken propeller blades in the wreckage. “I saw a rotor fly off, and it was scary because it just started twisting around in the air,” she said.

Snowbird is known as one of the nation’s premier ski and snowboard destinations because of ample snowfall and the variety of terrain. The two UH-60 helicopters crashed near Mineral Basin, a normally windy canyon on the backside of the resort known for its expert terrain.

Jones said it was routine for pilots in train to land in difficult areas regardless of weather conditions to prepare for combat, but rare for them to crash. He did not provide information on the cause of the crash but said efforts were underway to investigate the incident and to remove the damaged equipment from the mountainside.

“We do train on the edge so that we’re ready for a combat environment anywhere in the world. The crews assume some level of risk. Every time you go fly a helicopter, there’s a little bit of danger involved. I’m just happy everyone is OK,” he said.

The crash comes about a year after two similar helicopter crashes. In January 2021, a UH-60 Blackhawk crashed during a training exercise and killed three in New York. The following month, a similar crash killed three in Boise, Idaho.