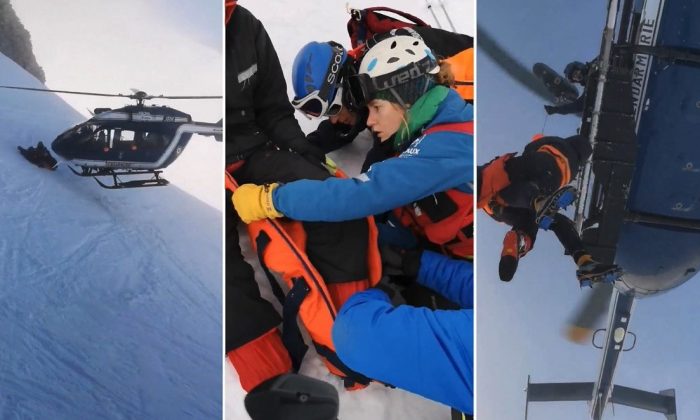 A dramatic rescue was caught on camera in the French Alps on Jan. 3, 2018. (Nicolas Derely via Storyful)
Europe

The helicopter rescue of an injured skier in the French Alps caught on video showcases the spectacular precision of the pilot as the craft’s rotor blades spin mere inches from the mountainside.

Nicolas Derely posted a series of three videos on social media, captioning them with a description of the dramatic mountain rescue.

The videos show the French mountain rescue service (PGHM Chamonix Mont-Blanc) landing in the area and helping the injured skier, before hoisting him into a helicopter.

“As scheduled, we hiked out at the Anterne pass above Fayet. 1000 m vertical drop, cloudy conditions,” Derely writes, adding, “very very hard snow.” The Pass of Anterne in Passy, France, is an attraction for holidaymakers in the French Alps, near the Swiss border.

The party consisted of six people, including two skiers with no experience in back-country ski touring.

“After a climb in the fog, we leave the clouds, as expected, in view of the Anterne refuge and the pass. We are in front of Mont Blanc, the view is breathtaking,” Derely continued.

Derely said that one of the group’s novice members, Tauziet, began to experience difficulty.

Derely said he tried instructing the 19-year-old on how to get down the hill safely.

“I coach him, make him do 4 in a row by patiently explaining what is a spatula, a ski upstream, downhill, ski parallel to the slope, etc. And I moved behind him at 2/3 of slope.”

The descent, however, proved too much for the young man.

“We are more than 50m, when, suddenly, Bruno slips back brutally, screams in pain, and lands on his belly, facing the slope, left leg twisted at the knee,” Derely said. “I unhook him, he is unable to move and explains to me that he has dislocated his knee.”

Derely said he covered Tauziet with his jacket to protect him from the freezing conditions.

“There is a lot of downwind wind,” Derely said. “I cover Bruno with my jacket, cover his head, get out my phone, and miraculously, I have 4 bars and 4 g.”

After calling for help, Derely captured footage of the rescue, including the breathtaking moment the helicopter hovers inches away from the steep slope.

Derely concluded his post by calling the spectacular videos a “beautiful gift made just for you.”

The footage shows the French mountain rescue service helping the injured skier, before hoisting him into the helicopter.

The official Twitter account of the French Gendarmerie Nationale posted a link to the video, with the caption, “a precise maneuver leads to impressive images!”

France Bleu asked the pilot about the maneuver, who called it the “skate support” and claimed it is “nothing extraordinary.”

Lt. Jean-François Martin, who has racked up over 5,000 hours flight time in his six years flying with Chamonix, explained, “We look at the helicopter’s rotor disk, the end of the blades, to make sure the angle of the ground is compatible with the pad support.”

“This maneuver is taught to all pilots who pass the mountain qualification,” he explained, adding that it allows rescuers to get on and off the helicopter very quickly.

He did add, however, that the maneuver makes for “a beautiful image” and as such is “very nice for the gendarmerie.”