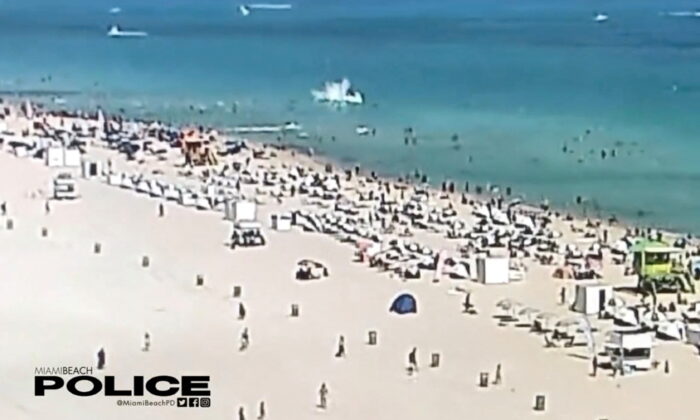 A helicopter crashes into the ocean in Miami Beach, Miami, on Feb. 19, 2022, in this still image obtained from social media video. (Courtesy of Miami Beach Police Department/@MiamiBeachPD via Reuters)
Local News

MIAMI—A helicopter crashed Saturday into the ocean waters off Miami Beach, plummeting a few feet away from swimmers in a crowded stretch popular among tourists, officials said.

Two passengers were taken to a nearby hospital in stable condition, and no one else appeared to be injured.

The Miami Beach Police Department said on Twitter that it received a call Saturday afternoon about the crash in the area off South Beach.

A video shared by the police captures the helicopter descending over the ocean and crashing into the water as sunbathers crowd the beach and others swim.

Police closed off a two-block stretch of the beach, in the area where travelers frequent outdoor cafes, restaurants, and shops. The police department said the Federal Aviation Administration is responding to the scene.