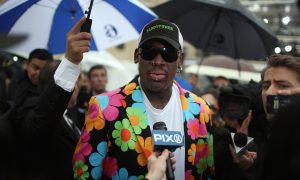 Helicopter crash Korea: A U.S. military helicopter crashed on the border between North and South Korea, it was reported Monday. The military said that all 21 people on board were brought to a nearby hospital

The U.S. Marine CH-53E made a “hard landing” south of the demilitarized zone south of North Korea, according to CBS News.

Fifteen people were released soon after the incident, but six are still hospitalized in stable condition.

The cause of the crash has yet to be determined and is under investigation.

The U.S. military said that the helicopter was partaking in joint American and South Korean exercises amid heightened threats issued by North Korea over the past several weeks.

On Tuesday, North Korea again said it would attack following small protests in South Korea, which included the burning of a portrait of former leader Kim Jong Il, who died more than a year ago.

“The military demonstration of [North Korea’s] revolutionary armed forces will be powerful sledge-hammer blows at all hostile forces hurting the dignity of the supreme leadership,” senior military leaders said via the state-run KCNA news agency, according to the Daily Telegraph.

The U.S. has approximately 28,000 troops in South Korea, which is still technically at war with its northern neighbor, according to Reuters. The two nations never signed a peace treaty to end the war 60 years ago.