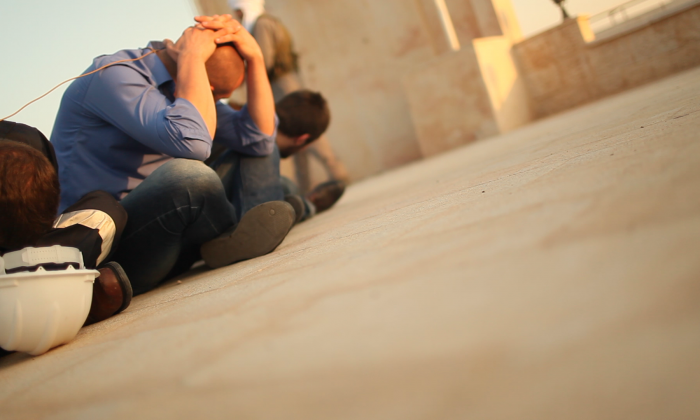 The hostages are tied together by detonation wire in this scene fro the PBS documentary Held Hostage. (PBS)
Entertainment

Held Hostage: The In Amenas Ordeal

Algeria’s In Amenas gasoline processing facility would be the perfect setting for a Die Hard movie. It is an isolated spot, surrounded by vast stretches of the Sahara Desert in every direction.

That is why many survivors wonder how several truckloads of al-Qaeda affiliated terrorists could launch a ground assault on the facility without the Algerian authorities noticing. Not surprisingly, many in the Algerian government would prefer to forget the embarrassing international incident.

Fortunately, director Bruce Goodison and his team have assembled a comprehensive tick-tock history of the In Amenas hostage crisis. Their revealing look at contemporary Islamist terrorism, Held Hostage, airs on most PBS outlets beginning Oct. 22.

With al-Qaeda reportedly operating freely to the south and east of In Amenas in Mali and Libya, security was obviously a concern for the expat workers long before Jan. 16.

Paul Morgan, the British security chief, had actually tendered his resignation out of frustration with lax plant security days before the attack. (Tragically, he would not survive to be vindicated by events.)

While military and gendarmerie escorted workers on and off the premises, no facility personnel were allowed to carry arms. That meant once Mokhtar Belmokhtar’s band of terrorist-brigands reached the plant, there would be no means of organizing any resistance.

Securing the first on-camera interviews of many survivors and victims’ family members, Held Hostage provides a very personal perspective on the terrorist attack.

Perhaps the report’s most shocking moment involves the circumstances surrounding the truly cruel and senseless murder of Filipino expat Angelito Manaois, Jr. Three Americans died at In Amenas, which should concern us all, but the losses were greater for Britain, Norway, Japan, and the Philippines. Regardless, the crimes committed in In Amenas warranted far greater attention than they received from the traditional old media.

Goodison’s team broaches a number of inconvenient questions throughout the program, particularly with respect to the conduct of the Algerian military. Granted, refusal to negotiate with terrorists is a defensible position, but it rather looks better if there is some attempt to stall for time while organizing a rescue operation. Whereas, strafing carloads of hostages is just hard to defend from any standpoint.

Held Hostage is technically quite well constructed, instilling a full sense of the factors that contributed to the desert calamity in just under an hour. Viewers will have the sense they could lead their own briefing session after watching it—and perhaps they should.

It a real exposé and a wake-up call, but its warning is likely to fall on deaf ears. Easily the most important television of the week, Held Hostage airs on most PBS stations from Oct. 22.